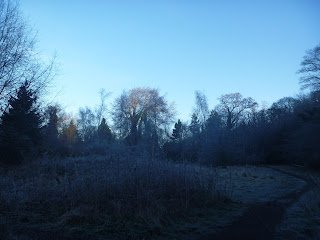 Every week I spend a morning recording wildlife and picking litter around Colinton Dell along the Water of Leith. It's always sad to see how many people throw rubbish in the Dells, though there's less of a litter problem here than along other stretches of the river.

Every so often though I find things that make me smile. Today I found an envelope in one of the Ladies Grottos*, when I opened it up I found this 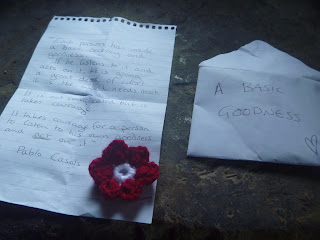 The letter is a quote from Pablo Casals, cellist and conductor:

''Each person has inside a basic decency and goodness.
If he listens to it and acts on it, he is giving a great deal of what it is the world needs most.
It is not complicated but it takes courage.
It takes courage for a person to listen to his own goodness and act on it.'

* The Ladies Grottos were built in the 18th Century as part of the Redhall estate which then owned this area. Each grotto was designed as place for women to sit while the men went hunting.
Crafted by Crafty Green Poet at 1:10 pm

Email ThisBlogThis!Share to TwitterShare to FacebookShare to Pinterest
Thinking about: Water of Leith

Well, that's a found piece of treasure not trash! Beautiful quote. However based on our current political so-called leader and his sycophants here, I don't think that it's true everybody has basic goodness inside. I am sadly afraid that some people are pure evil.

That was quite a find. Certainly something to think about.

Wow - what a wonderful find! A true treasure, indeed.

I'm glad you are a good citizen of the dells and clean up after people who aren't. (Although in the case of your quote - it was a good thing.)

It also annoys me to see the amount of litter that is left. Why not just take it home to dispose of and leave the place nice for others to enjoy!

That's a wonderful find, something has to keep you going in these dark times

I love that you found such a lovely bit of "debris." I am glad you took a few moments to share. Some may not have that basic goodness inside, but even believing that there is the potential for goodness in each person we know or meet may slow us down in rushing to judgement. I think that is a good thing, and (especially as a teacher) I look for what is good and true and bright in each person I encounter.

I am willing to acknowledge the existence of evil in the world, but I also agree with Casals that every person bears a bit of goodness. It's really interesting that he highlights the courage it takes to act on it. When the crowd is becoming nasty and mean, it can be tempting to "go along to get along." Choosing good over evil in even the little things of life is so important.

In any event, what a treasure you found. Perhaps we all should start leaving poetry and inspirational quotations around. It wouldn't hurt, and it might help.