Not all plants that spread are invasives....

The bluebells are out in Colinton Dell now 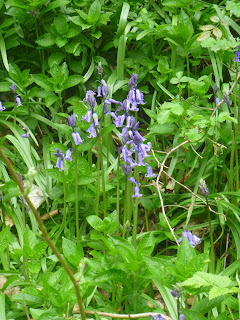 These are almost certainly hybrid plants, a cross between the native British bluebell and the Spanish plant. Many of the plants have all their flowers on one side of the stalk (a feature of the British bluebell) but they are quite sturdy looking plants (a feature of the Spanish plant) and they don't have the wonderful perfume of the British bluebell. They are spreading in the Dells, there are definitely more than there used to be. They are even carpeting the slope by the cyclepath, though not yet fully in bloom (if you look carefully you can see the blue glow in the photo below!) 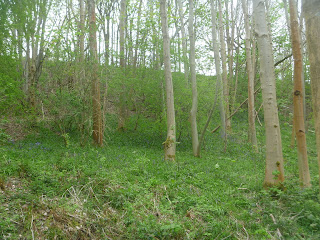 This part of the cyclepath is a route I've only just started taking, as a path closure makes it difficult to take the lower path, which goes past a wonderful wildflower patch which is great for insects when it's sunny. But I'm enjoying wandering along the cyclepath 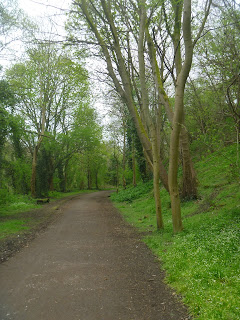 Today, just about where I took that photo above, I saw a mistle thrush chasing away a magpie. I'm guessing that the thrush was concerned that the magpie might steal her eggs.

It's not just the bluebells that are spreading. When I started my voluntary work helping Water of Leith Conservation Trust to look after Colinton Dell, there weren't many celandines here, but now there are carpets of them and this year they seem to be lasting much longer than normal 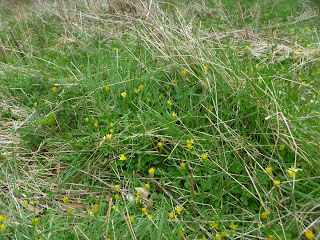 Also when I started, there was only one small patch of wood anemones, now there are two, both of which seem to be expanding 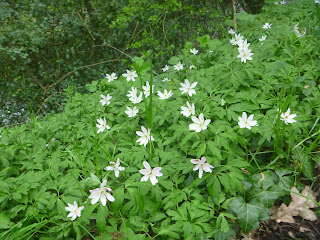 Not all the plants that are spreading are good news however. When I started this voluntary work, there was little few flowered leek in the Dells, now it seems to be everywhere. I've blogged about wild garlic (ramsons) and few flowered leeks quite recently, but now they're both in bloom and you can really tell the difference 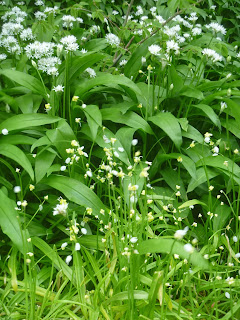 The native wild garlic is in the background with the wide, dark glossy leaves and the large flower heads and the few flowered leek is in the foreground, its foliage already yellowing and its distinctively odd (though I think very pretty) flowers. The leeks are definitely taking over areas which before were covered in wild garlic, which makes affected areas look very different. Both plants smell quite strongly of garlic, so that stays the same! I'm not sure what the ecological effects of few flowered leeks are, as I imagine the two plants are pretty similar in terms of what eats them (does anyone have any information on that at all?). A lot of people forage wild garlic, which can leave bare areas, ripe to be taken over by the leeks. So I suggest foraging the leeks instead, their leaves I think make as nice a pesto as the wild garlic leaves do.......

Another much more destructive invasive plant is Japanese knotweed. There isn't a lot of that in the Dells and the largest patch of it recently disappeared. On the Trust's volunteers Invasive Plant walk on Monday evening, I pointed this out and congratulated the staff on having the problem under control. However, it seems that the patch wasn't treated by the trust but had been removed by contractors who had to remove a fallen tree. It seems that no-one knows what happened to the Knotweed plant when it was removed and there are fears that it was chipped down with the wood from the fallen tree, which means this little area of the Dells could face a larger Japanese Knotweed in the future. As you can see here, there are already new shoots growing from the rootstock (this is normal, you need to treat the plant for at least three years to properly get rid of it.) 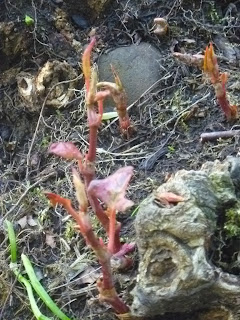 The red shoots are the Japanese Knotweed, few flowered leek is also growing in the rootstock. 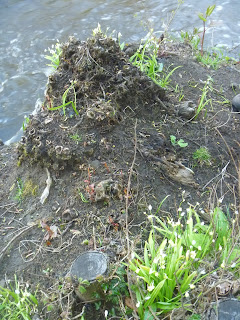 The larch flowers continue to develop rapidly, which is something I love to pay attention to, since only discovering the flowers 2 years ago 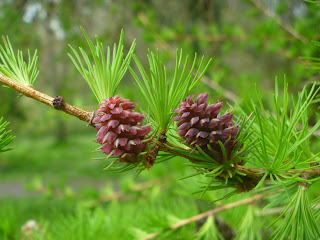 And a couple of words about the birds. I had the most wonderful view of a goldcrest, which was busily looking for food, hopping from branch to branch in trees that were below where I was standing, so I had a wonderful view of the crest on its head. There were in fact several goldcrests in the Dells, singing their high pitched song. I also heard willow warblers singing, which was lovely. Willow warblers visit the Dells some summers, but not reliably every summer so it was nice to have them back. Yesterday evening I lead a birdwatching walk round Arthurs Seat and we had wonderful views of willow warblers, two of them posed for us so that I could describe how to recognise them from the superficially identical looking chiffchaff (willow warblers have paler legs and longer primary feathers in their wings). You generally need to wait for them to sing before you can tell the difference.
Crafted by Crafty Green Poet at 2:10 pm

Email ThisBlogThis!Share to TwitterShare to FacebookShare to Pinterest
Thinking about: In and around Edinburgh, nature diary, photos, Spring, waterofleith

Hello, sounds like you had some wonderful birds sightings. The wildflowers are pretty, a nice path for a walk and birding. Have a happy day!

I love the English bluebell woods but in my garden I've mainly the Spanish ones or cultivars. The leeks are also spreading in my garden, but as long as they don't take over everything, it is all right, love them too. Japanese knotweed is rather invasive but I'm luck not to have that in my garden. So nice you saw the willow warblers back, occasionally they are here too, but no I cannot see the difference between chiffchaffs and willow warbler, I mostly don't see them at all but hear them sometimes.

Yes, I've now seen my first willow warbler thanks to knowing its song from a chiffy! Celandine has had an amazing spring here, still a bit about though past its best.

I love bluebells. On Monday I went to Richmond Park but got off at Kew Gardens tube station. A beautiful bluebell carpet was waiting for me.

Nice posts and it is interesting the different invasive plants that plague different parts of the world.

I always enjoy your blog posts around Colinton Dell.
Such a lovely place to visit and walk.

So lovely and green!

Such a wonderful spot -- and you and the other volunteers do such great work. I can't see the celadines (not sure of that spelling) in the picture -- but I am wondering if they are similar to our buttercups (I will go google them after I send this). Love the plants that belong there and I'm sorry about the invasives ... plants that don't belong are a big problem here in SW Florida -- things grow so easily in subtropical climates. It seems like they'd have to struggle harder in your area, but I guess if conditions are right for them anything will thrive.