I saw this lovely pair of mute swans today on the River Esk at Musselburgh. They were closely following each others movements and I was hoping to catch them forming a heart shape with their necks as they often do during their courtship..... but that wasn't to be! 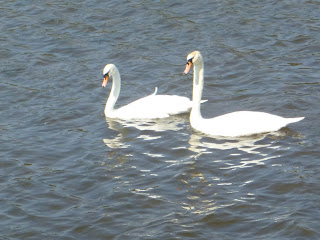 Plus swallows, house martins and swifts above the river and the trees full of birdsong.....

mute swans
the couple behind me
arguing politics

I've never seen a garganey, with that big white curvey, almost S shape on the head. Today saw many swans and squabbling geese at RSPB Langford, with some other, better birds too!

I would love to see some swans but, alas, we don't have them here.

Still nice to see a pair gliding by. I like your photo.

The swans are so regal. I have never seen them in the wild. Southern New England has Mute Swans, but there are none in Maine.