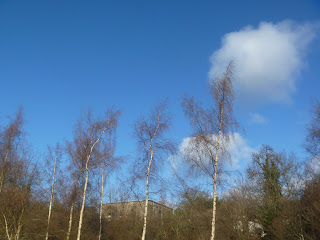 Silver birches in the 'Hidden Meadow' in Colinton Dell, alongside the Water of Leith.

It's almost a month since I promised to write a post about Edinburgh's trees!

Edinburgh is lucky in having lots of greenspaces, many of which are full of beautiful trees. The Woodland Trust website lists all the woodlands (including wooded cemetries) in the Edinburgh area. meanwhile Edinburgh City Council has compiled a list of Edinburgh's 'trees with a story', so you can create your own trail to link up with each one of these special trees.

Not all is rosy for our trees though. Recent years have seen storms rip trees up. Building work too threatens some of our trees. The Flood Prevention works along the Water of Leith have caused controversy over the number of trees that have been felled. There was a huge outcry when trees were chopped down in Canonmills and Stockbridge to make way for that part of the flood prevention work. The outcry was, oddly, much more muted when trees were chopped down near the Murrayfield Stadium (you can see the stumps on the left hand bank of the river in the photo below) so much so that I hadn't even realised how many trees had been killed until I passed by on the bus. 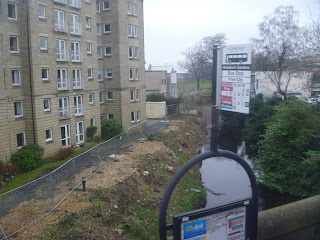 The worst thing is that just along the river from here, there is a natural flood plain, part of a local park and ground belonging to Murrayfield Stadium. The stadium would not allow any of that ground to be used as part of the flood prevention and insisted on artificial flood barriers being built by the riverbanks. I'm sure that barriers could be built closer to the stadium that would allow for the natural growth along the river to be protected. The trees will be replaced but it will take years for newly planted trees to grow to maturity. That's even before we think about the impact of the flood defence construction itself, though I can't say much about that as I don't know what the actual defences will look like.

It's not exactly a secret that trees can help prevent or at least mitigate the worst effects of flooding, read, for example, this article in the Guardian newspaper and this briefing from Friends of the Earth and Rewilding Britian. Admittedly it's trickier in built up areas and I would never deny people the right to protect their homes from flooding (though there are definite planning issues too, houses  built on floodplains are obviously going to be flooded at least sometimes!).


To end on a positive note, Tree Time Edinburgh, a project of  Edinburgh and Lothians Greenspace Trust works in partnership with other city organisations and has planted lots of trees in the city and has plans to plant many more.

Crafted by Crafty Green Poet at 10:13 am

Email ThisBlogThis!Share to TwitterShare to FacebookShare to Pinterest
Thinking about: campaigning, In and around Edinburgh, nature diary

It's so shortsighted it's crazy. "Hey let's rip all the trees up in order to plaster everywhere with badly constructed box housing. Floods? Nah, never happen"

The trees here are in bud, but my little oak tree is still sporting the dead leaves of last year. Hope it is ok.

Good morning, as I look out of the window we have a brilliant blue sky, just as the one you show in your first photo. Don't the silver birches look good against it!

Trees are so important and I always like it when I see a major re-planting programme.

Enjoy this last day of March and all good wishes for a very good April ...

You just can't have too many tress. The birches are lovely.

I always thought trees were important to have along streams and creeks. It is a shame they cut so many tree down. I love the sky in the first photo. Have a happy weekend!

Trees are good in a city--here the sacred tree is the live oak, which when they are old have so much character.