I first heard a few weeks ago that about twelve short eared owls had landed in Musselburgh. (Short eared owls are resident in the UK, but in the autumn and winter, the resident birds are joined by others coming over from Scandanavia). Since then every time I've visited the area, I've seen one of these magnificent, day hunting owls. Today though I was surrounded by them!

This photo is the best I could do, 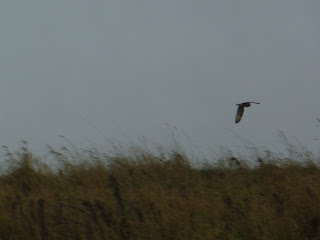 and to be honest i was much more intent on enjoying the moment, than catching the birds on camera.

At one point four owls were chasing each other across the path in front of me, then they were diving down into the grass, possibly to feed on something they'd killed earlier. Really a\mazing to watch, and at such close quarters too!

Among lots of other birds, I was also delighted to see two long tailed ducks (and lots of goldeneye) over the sea wall and two waxwings (my first this winter!) in trees alongside the mouth of the River Esk.
Crafted by Crafty Green Poet at 7:33 pm

Hoping for sightings around my home town this winter!

Good to see them - so many fly at night?

What an amazing time you must have had. I once had a Great Horned Owl fly past me at about as high as my head and maybe only four or five feet away from me as it passed. I did not hear it coming and it was completely silent as it flew by. Sometimes I hear them hooting in the neighborhood at night and recently heard screech owls, but have not seen any of these amazing birds in quite some time.

what an honour for you :)

Hope you see some too, Simon!

bunnits- that must have been an amazing encounter with the great horned owl!

Sometimes the moment is all we need to take a "mental" photo. :-) You were there. Lucky you

So pleased you were able to enjoy this sight ... amazing.

Hope the new week ahead will be a good one for you, it's going to be quite wet I think!