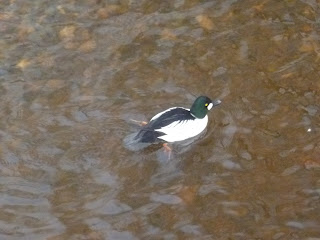 This goldeneye drake is one of several that were swimming around on the River Esk in Musselburgh today. They're already starting to think about their courtship displays, every so often one would throw it's head backwards and occasionally one drake would chase another.

On the Lagoons, the teals (which were further away and so I wasn't able to take photos of them) were even further advanced. A group of ten drake teals had gathered round a female and the males were throwning their heads back, lifting them up again, pausing then raising their tail end out of the water, showing off the yellow under their tail and the teal green in their wing.

Many ducks do their courtship displays in the middle of winter, but I think this is the first time I've seen it in December rather than January.

I also had a brilliant view of a kingfisher at the mouth of the River Esk. This is definitely one of the most reliable places to see kingfishers in the Edinburgh area.

As ever, red text contains hyperlinks that take you to other webpages where you can find out more
Crafted by Crafty Green Poet at 2:48 pm

What a beautiful duck. I believe they are about at RSPB Langford, must get out there over the Xmas break.