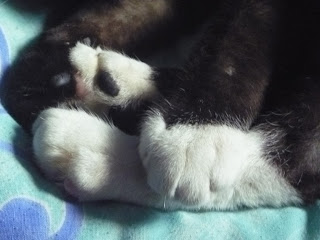 Treacle has adorably mismatched paws, one long white sock, two short white socks and one entirely grey leg. He is very quiet on his feet (in contrast to his sometimes incredibly loud meows!) but what is his carbon pawprint?

Using cat litter made from recycled paper, there are several brands of this type of cat litter, or you can make you own, though that seems very time consuming.

Making cat toys from upcycled materials, so far we've made balls from recycled foil from chocolate bars (there's an endless supply of that material!); toys from cardboard or fabric attached to sticks or string to be dragged along or dangled in front of Treacle and toys from stuffing old socks with scrunched up pieces of newspaper or recycled plastic packaging (no matter how hard we try to reduce the amount of plastic packaging, there's always some of it around). Most recently we gave Treacle a large paper bag, which he then basically spent two days ripping apart, hiding himself in and hiding the foil balls in.


I don't believe cats can become totally vegetarians. They're carnivores by nature, more so than even dogs. So we feed Treacle meat and fish based cat foods. We need really to find a sustainable brand, though even more important is a brand that Treacle will actually eat (and he seems to be a fussy eater). He likes rice cakes and toasted oat cereal so we feed those to him as snacks. So far Treacle hasn't killed any mice, I think his very presence in the flat scared off the mice who came in to feed on our bird food stocks (that had been more accessible than we realised!). Of course, if he were an outdoor cat, then Treacle would be chasing and probably killing the local birds. Although not a carbon pawprint issue as such, this is my biggest environmental problem with cats. The longer we know Treacle though, the longer we think that, although we were told by the cat protection shelter that he would be happy as an indoor cat, he is in fact an outdoor cat, who won't really be happy without being able to get out into a garden. This would be a real problem as we don't want to let him be an outdoor cat as we live three floors up and near a busy road. But he does meow and scratch at the flat door in the middle of the night, wanting to be let out....

(We've taken lots of advice on how to calm him down overnight - we use Feliway, a pheremone which is supplsed to calm cats down and reduce behaviour such as scratching and excessive vocalisations, we make sure he has an energetic playtime just before a late supper then bedtime and we ignore him when he meows in the night. None of this seems to work, though some nights he can be fairly quiet, usually he isn't.)

Heating is also problematic. We are the type of people who will put on an extra jumper or two before we put on the heating, Cats however like to have a warm environment. We think we may have at least a partial answer to this particular issue, Treacle has met Janosch, our tiger hot water bottle and they seem to get on very well. 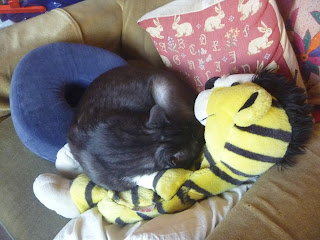 Email ThisBlogThis!Share to TwitterShare to FacebookShare to Pinterest
Thinking about: greenlifestyle, Treaclethecat

If he was an outdoor cat you could put a solar panel on him!

Have you thought about Harness training him then you could take him out for some exercise without worrying about his impact on the wild life,and may be set up a play area for him with a multilayer cat tree and a tunnel with lots of toys for him to climb on and play on/with.both these might help and you could try Bach rescue remedy for cats you rub it on their ears and it calms them down,xx Rachel

Hi Simon, good idea, but might not work in Scotland...

Hi Rachel, we're thinking of getting him a harness actually, good point. A dedicated play area is also a good idea, though not sure where we'd put it (ditto the cat tree). He seems happy to play anywhere and has plenty of toys. I'd never heard of Bach rememedy for cats, must look that out, thanks!

I love the hot water bottle idea.
Fortunately both our cats are indoor types. They like to watch the birds out the window but don't try too hard to go out. One cat has never been outside (we got her as a kitten) and the other got so anxious when we tried to let her out we never repeated the experiment. Just as well as I support leaving the local birds in peace.

Love the photo of Treacle with Janosch !

I love cats. I've had them since I was a kid.You are right in saying they are mainly carnivores. Since becoming a birder I've decided to keep our cats indoors because they kill lots of birds! Great photo of your cat!