I was brought up to think that the seasons changed at the beginning of months - so Autumn officially started a couple of days ago on 1 September. However, in reality I beleive that the seasons change when they want to, and in fact that seasonal change is different for different parts of the natural world. For birds for example, autumn started in the middle of August, to find out why, you can read Michael McCarthy's recent Nature notes in the Independent newspaper.

It certainly felt like autumn today along the John Muir Walkway. The flowers in the verge are mostly turning to seed, still looking beautiful though 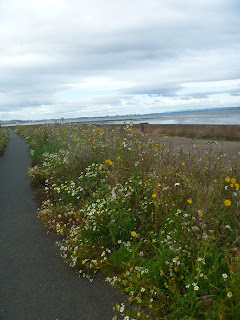 The poppies have not only mostly turned to seedheads but are mostly now ripe, 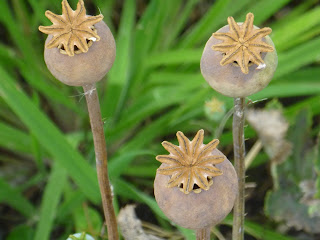 with their holes opened to let out the seeds 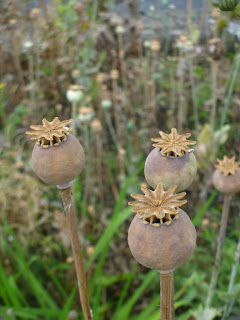 I only saw a few bees today and all of them were motionless, resting on flowers. This green bottle fly though was buzzing around though I was pleased when it kept still on the scentless mayweed so I could photograph it 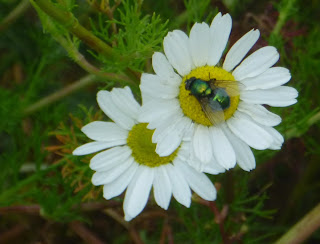 and the whitebeam berries are ripening 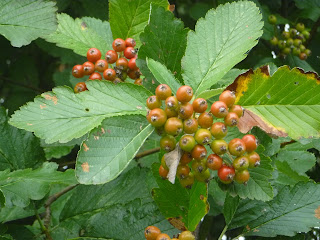 ***
I'm delighted that two of my bracelets have been featured in two separate Etsy Treasuries. For those who don't know Etsy, Treasuries are selections of items from other Etsy sellers, in both cases here chosen by Rhian. So thank you Rhian and you can see the treasuries here and here.

Email ThisBlogThis!Share to TwitterShare to FacebookShare to Pinterest
Thinking about: autumn, In and around Edinburgh, nature diary, photos, summer

Fall came blowing and raining in here on August 29! Now we will have Indian Summer.

I love your new header ...
Nice to see your photo's here - I'm still wishing for a slightly warmer September.