Stop, look and listen (to nature)!

It's always good to slow right down and stop for a while and watch the wildlife that is in front of you. Often in Scotland it can feel too cold for that to be particularly comfortable for long periods of time but today it was beautifully warm for the first time this year, ideal weather for just stopping and staring. So that was today's activity for 30 Days Wild.

I walked along part of the River Esk and the John Muir Walkway today (as I often do!). I stopped and watched these eiders for a while, the ducklings are just learning how to find their own food and seemed very enthusiastic about it! 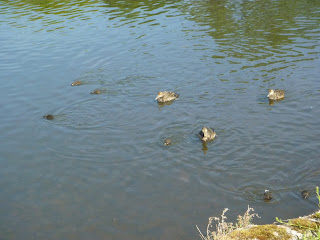 Close to these eiders, but less easy to capture on film (ie  I don't have photos) were two families of goosanders with youngsters at two stages of development. One female had six small, very fluffy chicks with beautiful mottled appearance, the other female had three older chicks, who had almost developed their adult shape.

I spent some time in the bird hides at the Musselburgh Lagoons. I sit here with my flask of decaffeinated coffee and my binoculars at any time of year. Drinking the coffee not only keeps me warm in winter but makes sure I sit for long enough to let birds appear, rather than just looking at what's there and then moving off. Today there were lots of oystercatchers on the lagoons, plus a few shelduck and some bar tailed godwits. It's a relatively quiet time of year for the lagoons, they become very busy in late summer and early autumn when the passage migrants pass through and the hides become much busier then too! 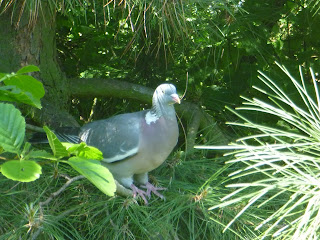 I then walked over the grassy scubland, keeping carefully to the paths, to avoid damaging the nests of ground nesting birds (such as skylarks). I stopped to watch three skylarks chasing each other and listened to another at least 2 skylarks singing high above us. I also listened to the blackcaps, willow warblers, whitethroats and reed buntings that were singing in the bushes.

I love the sound of Skylarks. That sound always reminds me of walks in the countryside on a hot summers day. Nice day by the sounds of things Crafty Green Poet.

Sounds like a lovely walk with nature. The eider and woodpigeon are great sightings. Enjoy your day!

Goosander are rather shy birds - we get them as winter visitors to the local lake from time to time, and even as chick free adults are not keen on letting a person get within 50 metres of them. To see little ones is a great spot!