Craighouse gets the green light 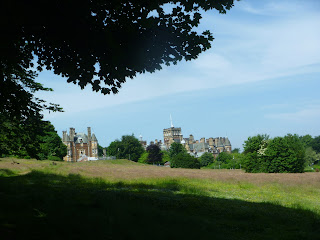 I've blogged before about the ongoing battle to find an appropriate development plan for the historic Craighouse site in Edinburgh. The site was for a long time the Thomas Clouston clinic, part of the Royal Edinburgh Hospital and then was used by Napier University but they then sold it after it became unsuitable for their purposes.

So this is a site that includes historic buildings as well as woodland and open green spaces. The site needs to be developed in some way to preserve the buildings and I don't think anyone would disagree with that. The question has always been how the site should be developed. Three development plans have been put forward for residential use of the site, the first two were rejected and there was a lot of public opposition from across the city to the latest development proposal.

Recently a community lead alternative development plan had been put forward, but perhaps it was put together too late, it certainly seems to have been entirely ignored in last night's council meeting which gave the go ahead for the latest official planning proposal for excessive new build housing on the green areas of the site. The council claims that 80% of the land will be left as green space, accessible to the public. The problem with statements like that is that they can turn out to be nothing but empty promises.

So the Edinburgh City Council has ignored local opinion and planning guidelines and passed a development proposal that will damage one of the city's historic sites.

The people of Edinburgh are getting so fed up with poor decisions about the architecture and green spaces of the city that they've put together a petition to express no confidence in the city planning department. You can sign the petition by clicking on the link.

Crafted by Crafty Green Poet at 8:01 am

I don't suppose my signature would count, but right on!

Throw the rascals out!

Hi Juliet,
The city where I live was the first planned community in America. It was built in the 1970's. Many of the old timers bemoan the loss of the original vision, but when something truly egregious is put forth, the people come together and vote it down.

I moved here in 1997. Not an old time resident by any means. But glad some old timers do remain who can articulate what the original vision was.