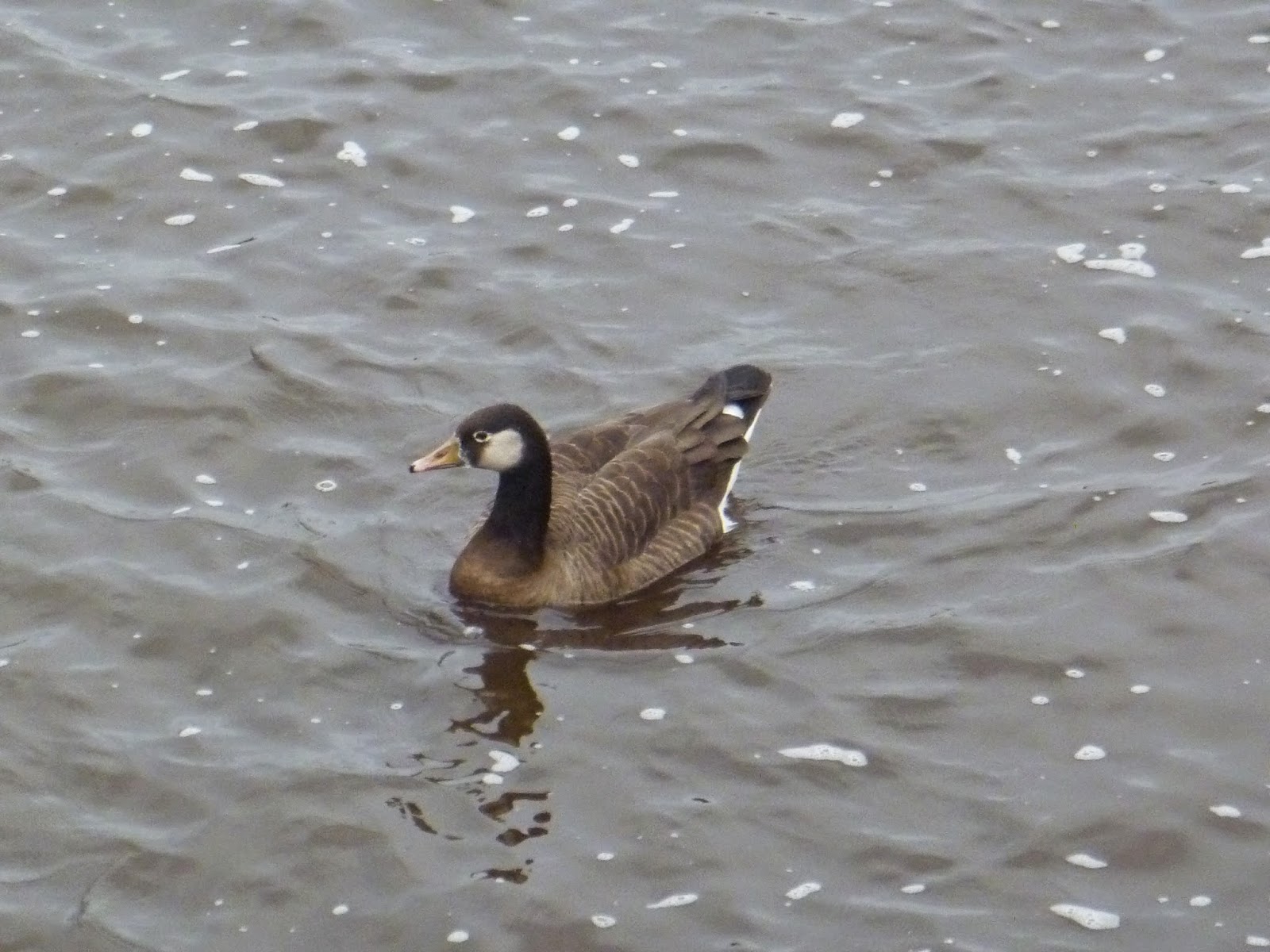 This is one of the Canada / greylag hybrid geese that I've watched grow up on Musselburgh's River Esk over the past year. Handsome bird, isn't it? Below, it's with a greylag and two Canada geese (plus two adolescent mute swans). Not sure what it's future will be... 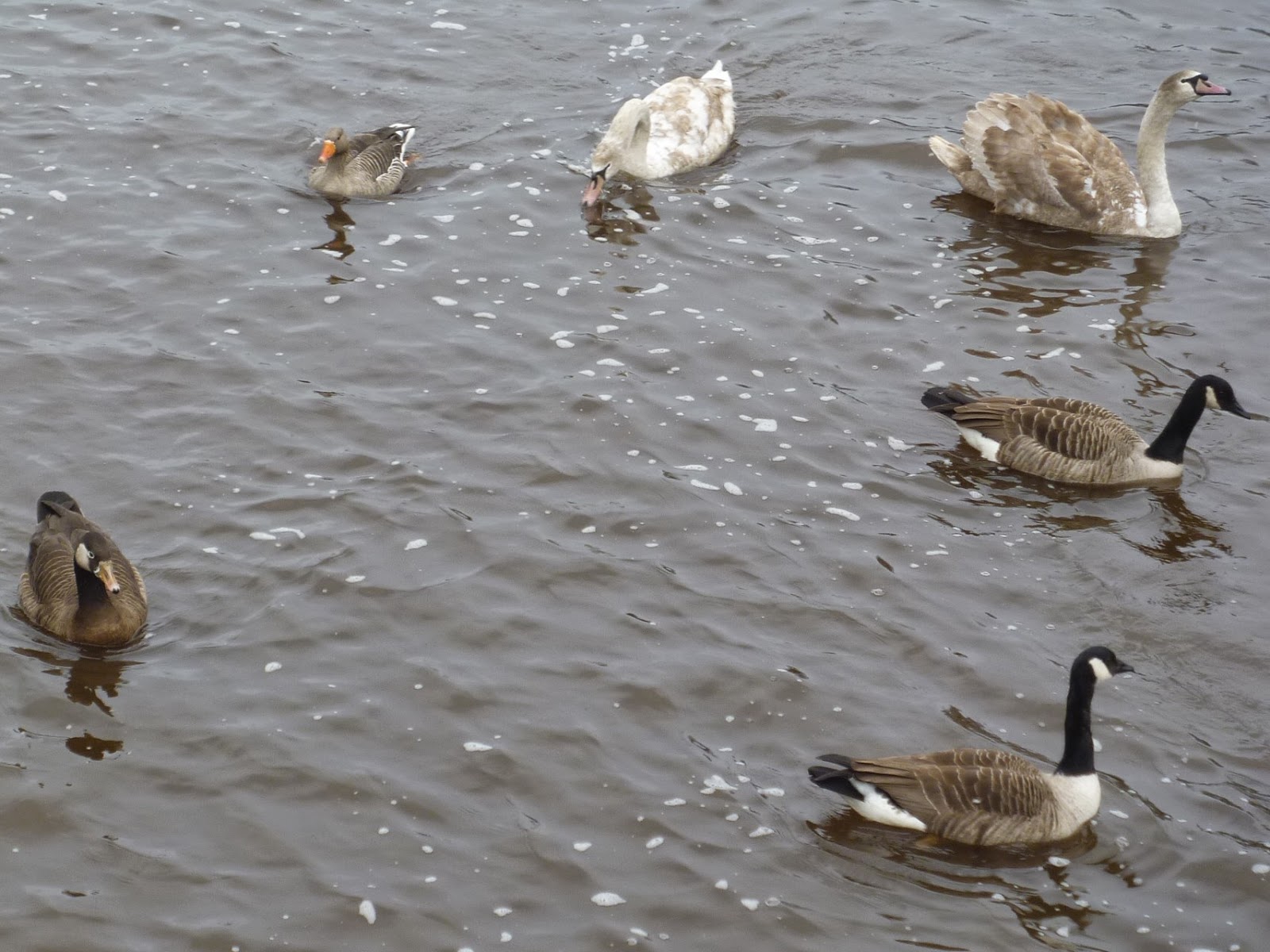 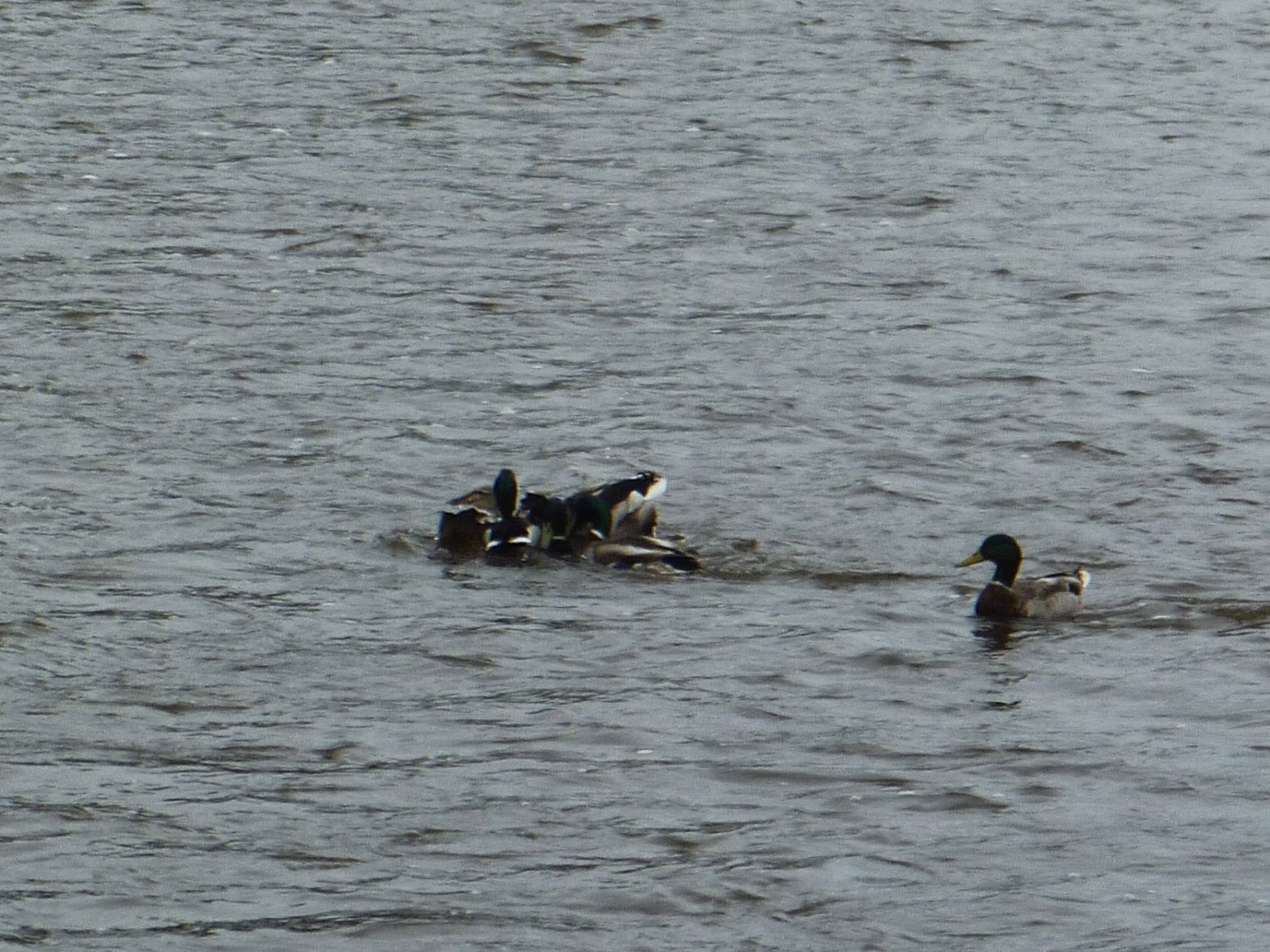 There are 3 or 4 males in that pile, underneath which is one female, who kept flying off and diving into the water to try to avoid the males' attentions. After several minutes, they all calmed down and floated happily downriver together.

Then I walked along the John Muir Walkway to Musselburgh lagoons. This walk is well known for the views you get in winter of waders and sea ducks, but at this time of the year the grass by the path fills up with smaller, more secretive birds. Yesterday I delighted in the first wheatears of the year, a male and a female chasing each other, several reed buntings chasing each other and surround-sound skylark song, which is something that is becoming rarer and rarer as skylarks continue to decline across the UK.

I was delighted to see about ten house martins swooping over the Boating Pond (or were they actually sand martins? it seems a bit early for house martins to be back in Scotland for the summer, but although sand martins have definitely arrived back already, these birds seemed too dark to be sand martins). Whichever species, always wonderful to see them.

Crafted by Crafty Green Poet at 11:27 am

Email ThisBlogThis!Share to TwitterShare to FacebookShare to Pinterest
Thinking about: birds, In and around Edinburgh, NaPoWriMo, poetry, Spring

I have been wondering if the current Saharan winds will be speeding the African migrant birds towards us more quickly than usual?

Good news that you have seen Martins , whether Sand or House, as far north as Edinburgh in the first week of April!

the hybrid is neat!

yes, ducks can be brutal!

The hybrid goose is neat! Wonderful sightings for you on the walk! Have a happy weekend!

what a terrible way to mate for the female. that couldn't be a good experience with all those males pushing at her... that Canada greylag looks so much like the Canadian goose. it's beautiful. so happy you've been able to see/ hear so many birds... so far i have seen and heard the eastern meadowlark, robin, red winged blackbird, eastern bluebird and grackles. i've also seen some sparrows.

i haven't seen any frogs yet but last night i could certainly hear them. what a great sound that is. hope all is well. have a great night~

Some migrants have begun to be seen here, in spite of the long winter. At our pond's edge today... a catbird. Nature teaches. _m

Dartford Warbler - that's a good point about the Saharan winds, we've luckily not got any of the desert dust up here...

Naquillity - I always hate to see the mallards mating like that, but they seem to always do that. Yes the Canada / greylag looks quite like a Canada, but the facila markings are different, and the beak's a different colour

Magyar - thansk for the haiku!

speedy - it is indeed, now all we need here is to see the sun...

Hi Juliet, it's great to see your blog. You must get a very different picture of the natural world from me in the fens. Interesting about the canada/greylag hybrid - I don't think I've ever seen that before!

Thanks for coming and looking at my own blog.

floating goose
who knows what
lies ahead