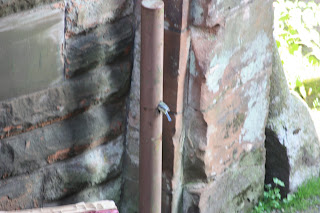 Birds are at their most active at this time of the year. When we were staying at the Friars Carse Hotel just outside Dumfries we were delighted to see a pair of blue tits nesting in quite a strange place outside our bedroom window. (Thanks to Crafty Green Boyfriend for this photo, hopefully if you click on it, you'll get a better view!)

At one point the entrance hole to the nest site was blocked by what looked like a suction device, it was quite upsetting to see the blue tit parents trying to peck their way through the device. luckily it was removed quite speedily and the birds continued feeding their young. We didn't see the young leave the nest, but we are pretty sure that they did leave safely.

When we were in the Wood of Cree, Dumfries and Galloway, we watched blue tits fledging from a nest, it was so sweet to see them jumping out one at a time into the branches, watched by their parents.

At Dalswinton Wood just outside Dumfries, we saw two tiny treecreeper fledglings that were shuffling round the tree trunk following their parents who would every so often push food into the mouth of one of the fledglings.

Of course not all birds look after their offspring so well. We heard cuckoos a couple of times while we were in Dumfries and Galloway, including by the river near Clatteringshaws Loch (see photo below). At the same time we heard the lovely song of the willow warbler, which is one of the birds that the cuckoo is most likely to parasitise by laying its eggs in the warblers nest. 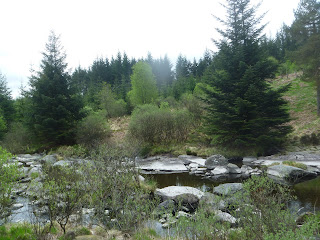 Back home, on a recent trip up Arthur's Seat, we watched a jackdaw pair for a while as they flew in and out of a gap between stones in a wall, the nestlings in the nest (hidden away in the gap) made quite some noise as their parents fed them!

Then on a recent walk through the Dells along the Water of Leith, we were deighted to see that treecreepers are nesting in one of the nestboxes that volunteers of the Water of Leith Conservation Trust put up earlier in the year. Interesting though, that the treecreepers chose a nestbox that is designed for blue tits, and in fact I'd seen blue tits checking out this box earlier in the year.

I need to go on a bird-watching trip again soon. It's been a while and this post has inspired me to do so :)

I'm so glad that birds make such resourceful parents.

I think I have heard cuckoos'singing only once or twice and their sound in my mind is mixed up a bit with that of the greydoves.
About jackdaws: I haven't seen many of them in Venice now as in the previous years, blackbirds instead seem to be more...
And surprisingly I keep hearing from time to time here somewhere in the maze of brown-red rooftops the elaborate cooing of a woodpigeon.

Lovely that you have seen and heard all these fledglings! I have never seen a jackdaw - I think we talked about this before - and would be overjoyed to see a pair coming and going from their nest!

We have starlings nesting in our roof each year, I don't know if they pass the word that it's a good place to nest but they come year after year and it can't be the same one's. Maybe the young remember it?
Our feeder on the tree outside is much used but this year we have not had any Great Tits, this is the first year of not seeing them.
Briony
x

That's funny, that blue tail sticking out of the hole in the pipe! Strange place to pick for a nest ...sometimes you wonder. Looks like it was a great place to stay.

It is neat to see all the nesting birds now. I love the cute shot of the bird's butt hanging out. What a place for a nest.

Nesting time is such a special time of year... Michelle

Birds, Rabbits - just when you think you've got them figured out ....

Spring is a wonderful time of the year, to see all the little baby birds and nests.
Lovely to see the bluetit.

We have a lot of blue tits here Juliet and they will nest in the tiniest of holes. One pair are nesting right opposite the back door under the corrugated roof of the shed. When I go into the shed I can hear the babies making quite a racket.

Even the names of these places sound magical. Thanks for sharing your birds with us!

I didn't know the cuckoo was parasitic. We have cowbirds here which do the same thing. In Michigan, only an extensive trapping program kept them from driving the Kirtland warbler to extinction.