Swans at Sea and Bees with Knees

Swans are more usually associated with inland waterways but at Musselburgh they enjoy riding the waves of the Firth of Forth. 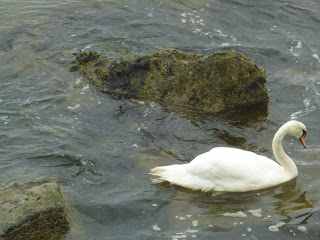 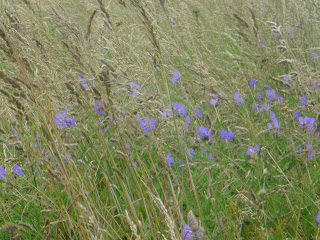 and lots of bees buzzing around. This one was showing off her knees as she enjoyed feeding on tall melilot. (Of course bees don't really have knees, it's just a fanciful name for their pollen sacs, where they store the pollen they collect as they fly from flower to flower) 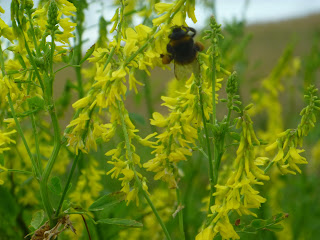 Large numbers of eider ducks on the sea, several common terns hovering around, one of which dived repeatedly for fish and came up with one in its beak! A few bar tailed godwits were striding across the mudflats, including a couple in their rich red summer plumage, the first time I've seen them like that, normally I've only seen them in winter plumage. A few turnstones too, looking very bright and several other species. On the Lagoons, there was a large flock of lapwings, just like last time I was there, this time though I saw them wheeling round in the air, a beautiful sight, and one that is becoming increasingly rare as this species is declining drastically. Plus, one singing reed bunting. I don't generally take photos of birds, apart from large slow moving species such as swans or herons, I'd rather enjoy watching them than take bad photos. However you can follow the links in the text to go to the RSPB website, which has lovely photos, drawings and recordings of all the birds I've mentioned.

Lovely swan photo. You are a talented naturalist and photographer.

The Firth of Forth and a bee shows her knees. I loved hearing about this faraway spot my eyes have never seen.

You quite often see swans on the sea - perhaps they spend most of their time on a piece of fresh water somewhere. It always seems to take me by surprise.

I love melilot Juliet - we hardly see any round here. The hearest things for us is agrimony.

I love the photo of your graceful swan and how sweet the bee is.
Hope that you are having a lovely week

I never knew that about the bees knees - haha - just thought it was a silly rhyme :)

I can't tell you how much I love the name Firth of Forth; it has a great ring to it. I was in Scotland in 2005, my first and so far only time there, and I loved visiting this area.