This summer so far in Edinburgh we've had mostly grey skies and a lot of rain. So we were very happy to see blue skies this morning! We had a lovely walk round Arthurs Seat and enjoyed the many flowers in bloom. The first photo shows birds foot trefoil (the yellow flower) in lovely contrast with the little purple flower, whose name escapes me. 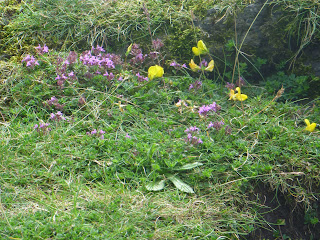 Despite the fact that birds foot trefoil is the favourite food of the common blue butterfly (which I blogged about here), we didn't see any of those, though we did see several ringlet butterflies. 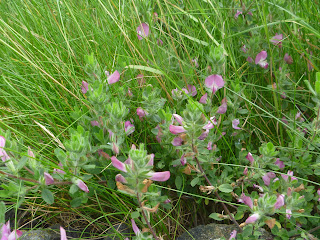 This is rest harrow, which belongs to the pea family as does the birds foot trefoil. 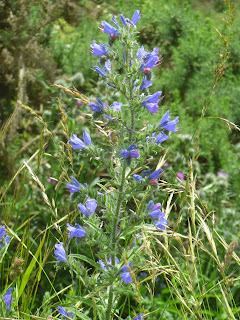 And this is viper's bugloss. I remember when I was young I used to love the name of this plant and also really wanted to find it, I think I was fascinated by the fact it has pink and blue flowers. It grows quite profusely on parts of Arthurs Seat.

While we were admiring all the flowers, swifts, swallows and house martins were flying around, sometimes quite low over our heads. While we often see a few swallows and house martins here in the summer, this is the first time we've seen swifts. In fact it's been an odd year for swifts. We've seen fewer than we normally would over the roofs of the buildings round where we live, but we've also seen more of them in other places round Edinburgh, including several in places where we don't normally see swifts. It's quite odd. I know that swifts are one of the species that has been suffering from the poor weather we've had so far this summer, but in Edinburgh they seem to have dispersed rather than declined.

As ever, red text contains hyperlinks that take you to other pages where you can find out more.
Crafted by Crafty Green Poet at 6:59 pm

I had never heard of a plant having two colors of flower so I googled vipers bugloss. I learned that the plant had been introduced in this country and is now regarded as an invasive species in the state of Washington. Sigh...

A lovely post. What beautiful flowers ... and we also saw some Viper's Bugloss today - at Minsmere. What a relief all round the UK to see some sunshine!

So glad that you are having some summer there at last and you can get to enjoy walking and taking in all the beautiful sights. The flowers are pretty.

What do swifts eat? Bugs? Whatever it is, they are off looking for it!

I'm sorry that you're having a damp summer; that's what we had last year on the east coast of Canada. This year our summer is more balanced. Perhaps we're taking turns. I wish you sun and lovely summer walks. Thanks for the great photos.