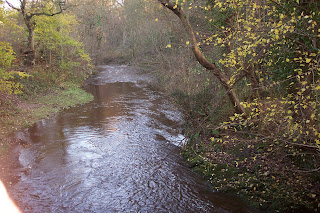 This morning we walked along the Water of Leith through Colinton Dell. The ground was covered in leaves (and very slippery in parts!) the trees were largely bare, the sky was blue and it was chilly but not too cold. The trees were full of birds, though many of them kept themselves hidden despite the lack of leaves on the trees. We heard blue tits, robins and jackdaws and saw coal tits, magpies, woodpigeons, mallards and carrion crows. When we crossed the footbridge over the river we caught sight of a heron. Then we walked further up and saw a second heron from the bridge near the weir (click on the photo to see it!). 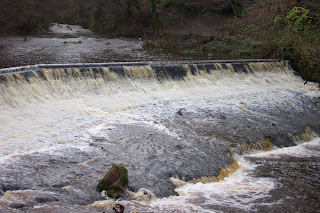 We were able to watch this heron for a while as it wrestled with (and swallowed) a large fish then flew up river to drink and rest.

We then walked into Colinton, which is a village that has become part of Edinburgh but still retains its village feel. Just as we were about to get on the bus to come home, we saw several redwings in the trees near the bus stop. Redwings are one of the UK's winter thrushes, so it must really be winter now.

You can read about more of our weekend walks by following these links:

Email ThisBlogThis!Share to TwitterShare to FacebookShare to Pinterest
Thinking about: In and around Edinburgh, nature diary, Scotland, Sunday Scribblings

Taking nature walks is the best kind of walk. We don't have that in Delhi. At least now. They are destroying the ridge and the river beds for the Commonwealth games in 2010. It is indeed very sad.

This is lovely. I think Edinburgh, more than many cities, manages to preserve a sense of wildness, if not wilderness, mixed in with the concrete, thanks no doubt in no small part to its incredible geography.

I'm glad you're doing a series of these. I love reading about other people's walks!

i live in a very rural area,, and although i seldom walk it,, it is comforting to know it surrounds me.....

What a wonderful post Juliet... great pics as well! Thank you for sharing this excellent walk... ;)

I was also on the Water of Leith today, as a shortcut between Stockbridge and Roseburn, and whenever I’m there, which is not that often, I marvel at how wild and beautiful it is, yet so near to the city centre. While I was at Stockbridge a heron suddenly flew in – such a huge, impressive bird – and perched itself on a little island. I wonder if it was your Colinton one, having flown up-river …

Oops, I was mixing my up-rivers with my down-rivers there, Stockbridge being a long way down-river from Colinton.

Also I kept bumping into people running the Water of Leith Half-Marathon. Like anyone out running, though, they didn’t look like they were having much fun …

A couple of years ago we were all set to relocate to Edinburgh (job-related) and I considered living in Colinton Dell, it's lovely (mind you so is much of Edinburgh).

mm - I think you're right about Edinburgh, though Glasgow apparently is the city with the most green space in Europe.

Paisley - yes even if you don't walk in the countryside, its nice to know its there.

Golebnik - there are lots of herons along the Water of Leith, I'm always impressed by how many we see.

Jo - Edinburgh is a great place to live!

Gorgeous shots Juliet. You still have leaves left. We are knee-deep in snow tonight and it's still coming down fast and furious - very light and fluffy and so beautiful but deep!
We have a forest and a creek right across the street. I go everyday to walk the trails rain snow or shine. It is well taken care of as the stream contains eels found nowhere else in the world as well as a heron, the wonderful pileated woodpecker, jays, towhees, a pair of magnificent bald eagles, an osprey and many more.
Children often go on field trips through here and are taught to be environmentally conscious. Ok I've rambled enough here LOL.

That is beautiful! Love the photos. Seems so peaceful.

For some reason this post made me feel really peaceful. I think it was the birds and the water. What a lovely, natural place surrounds you!

So many beautiful walks to be had around the world...

that was a wonderful walk...!

What a splendid walk, and so accessible too it sounds. Thank you for sharing it.

I Loved how you shared that with us. Written splendidly!

Loved going on a walk with you!

This is my plan today......a Sunday walk along the river and into the woods.

i love to walk in the nature and we are quite lucky to have some nice places in vicinity of ljubljana. grey herons are quite common here, too.
and it's amazing how similar your landscape looks to ours.

I liked your post very much because of the lovely pictures of course and most of all because of your knowledge of the nature that surrounds you. Most of us do not know the Flora & fauna that surrounds us and are poorer by this lack. I intend on reading about your other walks.

What beautiful pictures! It's nice that you so appreciate the wonderful place you live in!

Beautiful place to walk. Herons are pretty spectacular - we have a few here and they fascinate me!

Janice -thanks for your long comment, your forest sounds lovely - all those birds, which I wouldn't recognise!

Selma - yes it is very peaceful!

Awareness - hope you have a lovely walk too!

Alchemist - I love finding out about nature, learning the species names, I find it sad that so many people don't know much at all.

Tumblewords - they are magnificent birds, aren't they!

How I envy you, living here in a town - albeit in Warwickshire but not a deeply rural part - and missing the days when I lived first in the Isle of Man (with its many rushing glens, like those pictured here) and in darkest North Cornwall with its rough windswept beaches and cliff-edge walks. I often walked out then for hours, drinking in wilderness and able to think clearly, free of the house and television etc.

It's very tame here, by comparison. Especially in winter. But we make the most of the greenery that we can.

Such a beautiful walk, I have always loved walking - I dont get to do it as much these days...it was nice of to post the pictures. Thank you.

What a wonderful walk you had.

I could hear the water rushing over the falls.
Lovely.
Have a wonderful week.
Frances
http://blogforth.com

This is a lovely post. I hoped to do something similar with a week-end walk, but we got about eight inches of snow... too deep and wet to walk!

Inland Empire Girl - that's a lot of snow! We've never had that much snow here!

Frances - thanks - hope you had a good weekend too!

Sarala - it was, thanks!

UL - thanks, glad you liked the photos!

Jane - oh I love North Cornwall too! Never been to the Isle of Man, must go sometime.

How wonderful to be so close to nature!

Thank you for taking me along on your walk...gorgeously descriptive. Now I must investigate further your post on telephone haiku....interesting!
jodi barone