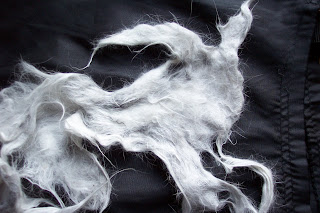 I discovered the following information on the felt making process, more detailed than the previous link I posted on the topic. I've now attempted to make some felt from our rabbit Anya's shed fur that we had collected while she was alive. It wasn't the most successful crafting experiment ever, I have to admit:

Problem number one, the fur had compressed too much while in storage, so was almost a felted lump to start with and it took a while to pull apart the fur. It also meant I didn't have as much fur as I thought I would, since some was unusable.

Problem number 2: I wasn't patient enough or thorough enough in my treatment of the fur. So rather than a nice uniform piece of felt, I have a raggedy mess. However as you can see from the photo there are definitely some bunny ears in there and I will use the rest as clouds in fabric collages. Plus it may look raggedy, but its a beautiful soft felt, just as you would expect to make from the fur of such a beautiful soft bunny!

Crafted by Crafty Green Poet at 10:15 am

this makes me think that if you ever get another pet now you know what to do :)

An illustration for an innovative children's book about death and beauty? The velveteen rabbit croaks again. For *real* this time.

Sorry. Was that in bad taste?

Sathya - thanks for the invitation.

Ren Kat - thanks for the idea, I was thinking more of rabbit contemplates under a cloud shrouded full moon....

i wasn't imagining it to look like that, but you know, it's even nicer than i imagined it would be! looks quite magical and mystical...
i think you did a really nice thing there.
and thanks for the tips btw, i shall be tyring it out with padma fur!

Hi Crafty! I love the idea of bunny ears and clouds from Anya's felt -- very sweet. And I bet it does feel wonderful.