Fungi are amazing, there's such a variety of them. One form of fungi that never ceases to astonish me is the Earth Star. There are several species, which I haven't yet learned to tell apart, but all of them are quite striking in appearance. I found this one on the overgrown area at the back of the roof of a building at the corner of Spylaw Park (the roof is on a level with the Water of Leith Walkway that passes by the park). 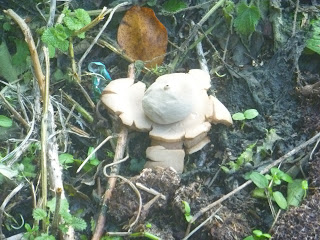 I've seen Earth Stars in several places in Edinburgh, but never before in this particular spot.

Email ThisBlogThis!Share to TwitterShare to FacebookShare to Pinterest
Thinking about: autumn, photos, Water of Leith

That is an interesting one!