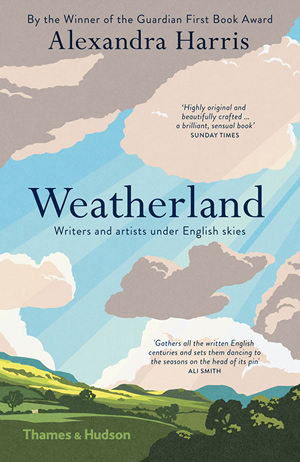 Weatherland is a historical exploration of how English culture has responded to the weather from the Romans to the present. It offers fascinating insights into how people in England have seen and thought about the weather and how that has affected visual art, literature, buildings and clothing. Harris shares a wealth of quotes from writers including Chaucer, Milton and Virginia Woolf, analysing their attitudes, with for example an interesting compare and contrast in attitudes to the weather from the Bronte sisters and Jane Austen. The book is lavishly illustrated, including photos of baptismal fonts, pages from medieval illuminated manuscripts and paintings by artists including Constable, Turner and L S Lowry. The last chapter brings things totally up to date by assessing why writing about the weather is important:

"..accounts of direct, sensual, even overwhelming weather experience are prized by readers increasingly regretful of their separation from natural places and natural processes. Many readers are grateful, too, for reminders of all those little landmarks in the cycle of the year, which are too easily missed if the office looks the same each day, and you travel home in the dark. At just this moment, when the average diary looks less like a medieval almanac than ever, English culture has turned passionately seasonal. And in this critical period when climate change threatens to throw the seasons out of kilter, artists and writers have reaffirmed the wonders of the years repeating stages."

This final chapter also considers the role of the arts in terms of representing and reflecting on climate change, one of the great challenges of our times.

This is a scholarly (though not actually academic) book of cultural criticism that focuses on the topic of the weather, bringing together ideas in a way that I found fascinating. I'd definitely recommend it to anyone interested in our relationship with the weather.

Weatherland by Alexandra Harris, published by Thames and Hudson (2015)

A short article on a similar topic can be found on the Conversation blog : Three Things historic literature can teach us about the climate crisis.