The Great Warming by Brian Fagan 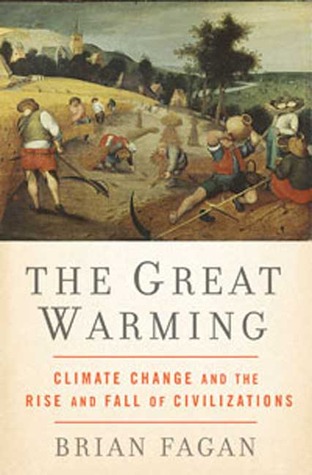 Subtitled 'Climate Change and the Rise and Fall of Civilisations' this is Fagan's analysis of the Medieval Warm Period, the time from the tenth to the fifteenth century when the earth experienced a rise in global temperature and how this climatic change affected societies across the world.  These centuries of amiable weather allowed European countries in particular to flourish and were followed by six centuries of much more unsettled weather (see my review of Fagan's Little Ice Age here).

The book shows how a climate that brought better harvests to many European countries, at the same time brought prolonged and devastating drought to many other parts of the world. The increased temperatures lead to cultural developments such as new strategies for storing water and the development of more drought tolerant cereals, but that wasn't enough to prevent the devastation in Africa and other parts of the world.

Fagan looks in some detail at various parts of the world and how they were affected by the Medieval Warm Period, from details such as fine grape harvests in England, and how great storms in the Netherlands lead to the formation of the Zuider Zee bay to the effect that climatic changes had on the Mongol empire under Genghis Khan.

Alongside the social history of the period, Fagan explains some of the scientific methods used to study historic and pre-historic climates.

The Great Warming is well worth reading for the interesting way it pulls together histories from various countries together to consider the global impact of climate change. The reader is then encouraged to consider our current climatic changes in the light of what has gone before.

The Great Warming by Brian Fagan, published (2008) by Bloomsbury.

It does sound interesting. In the Americas, there were several major societies that for unknown reasons collapsed around the 12th Century (a couple centuries before Columbus) that is thought to be climate related. In the America Southwest it may have also been a time of more volcanic activity. The other group are the Mayans in Central America.