The Birds from my Window - 30 Days Wild

We live in a very built-up part of Edinburgh, but we have plenty of birds to watch from our window at this time of year. I've often blogged about the swifts who fly around our streets, and we're still hoping they may choose to nest in the new nest boxes we erected this year (though more likely they'll wait a couple of years before they do so).

One bird that doesn't need a nest box is the lesser black backed gull, a pair of which have nested on a chimney pot across the road for the past few years - they're long-lived birds, so I'm tempted to think it's the same pair. The nest will be difficult to see in the photo below, but is on the chimney pot in the middle of the photo. 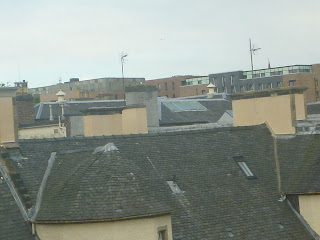 I'll zoom in a little, though even then it isn't entirely clear! 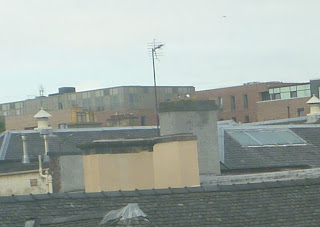 I drew a quick sketch of this gull for International Nature Journaling Week - the text reads - "Lesser black backed gull nesting on a chimney pot. Gulls have nested here for years (the same pair every time?). The vegetation on the chimney pot offers some camouflage for the eggs." 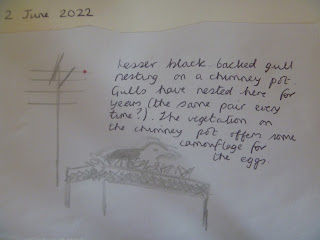 It is always entertaining to watch the chicks once they start to move around, they become quite adventurous very quickly. So that's something we're looking forward to seeing later this year!

The Birds from my Window for 30 Days Wild.

Email ThisBlogThis!Share to TwitterShare to FacebookShare to Pinterest
Thinking about: 30DaysWild, birds, In and around Edinburgh, nature diary, summer