After a few beautiful, unseasonably warm days, it's back to chilly weather! I braved the low temperatures today to revisit St Cuthbert's Cemetery to continue my work of surveying the wildlife in all the cemeteries managed by Edinburgh City Council. 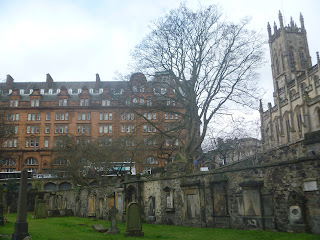 The cemetery is definitely coming into bloom with daffodils 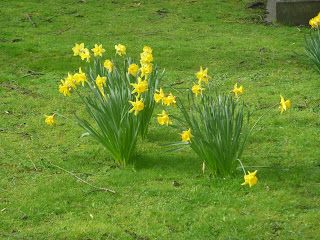 and Glory of the Snows 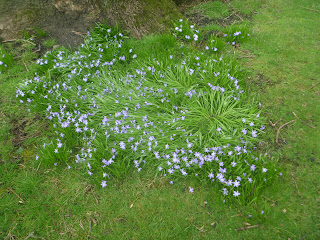 If the weather had been as warm as it was on Monday I might have seen some butterflies, but as it was, the only colourful insects I found were a couple of ladybirds, still hibernating including this Harlequin. If you look carefully there's another ladybird behind it, one of the variant forms of 2 spot ladybird, I think. 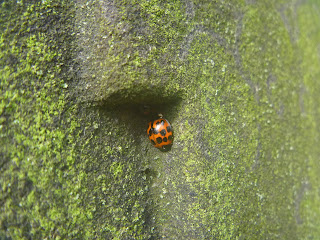 Two mistle thrushes were wandering around the cemetery. This one posed so long on this gravestone, I began to worry it might be ill 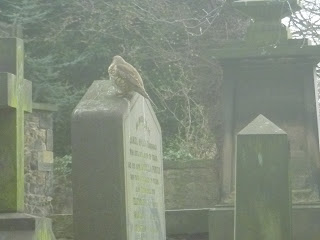 but then it flew down to the grass, energetically poked around for worms then flew into a tree, so I think it was probably okay.

You can read about my previous (much sunnier!) visit to St Cuthbert's in this post.

Glory of the Snows ... what a wonderful name!
So pleased you found the ladybirds. We have sleet forecast for tonight, so there is probably not much chance of seeing much around here tomorrow.

St Cuthbert's Church looks like a beautiful and attractive church with amazing architecture. These daffodils and other flowers are beautiful too.

Hi Caroline, it's been sleeting here today, though with periods of bright sunshine in between! And yes Glory of the Snows is a wonderful name for this pretty flower!

Hi Amila, thanks for visiting!

I've been to that one, too. A beautiful place.

Hi Jeff, I'm glad you were able to visit this kirkyard when you were in Edinburgh! It is beautiful.