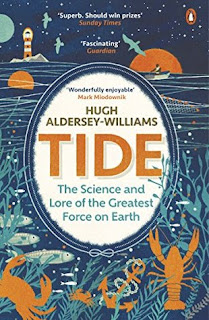 Subtitled 'The Science and Lore of the Greatest Force on Earth' this is a chronological look at the development of thinking about tides. It covers mythology, science, natural history, art and social issues around tides from the times of ancient Greece to the present day. The historical narrative is interspersed with the author's observations of tides in various oceans.

Ancient Rome, Greece and Egypt were all situated in areas around the Mediterranean, which doesn't have major tides so the tides as such didn't play hugely significant roles in these cultures, until the Romans expanded their Empire beyond the Mediterranean (and found the tides a significant obstacle to invading Britain). The first significant scientific research into tides took place in the area that is now India.

Tides obviously have a profound influence on the wildlife of the coast, particularly the intertidal area (the area between low tide and high tide that is constantly being deluged by water then drying out). The book contains a fascinating chapter examining how wildlife responds to changing tides, from the feeding behaviour of wading birds such as knots to the breeding cycle of the grunion, a fish that lays its eggs on the beaches of California.

Tides have played major roles in war (e.g. the D-Day landings), tragedies (e.g. the death of 23 cockle pickers on Morecombe Bay in 2004), historical turning points (e.g. The Boston Tea Party) and the reshaping of geography. Historically tides have always eaten away at coastlines, but in these days of climate chaos, this effect of the tides is increasing. Tidal defences have been built in many places, while in others the tides are harnessed to generate electricity.

Tides have influenced artistic creations too, including Handel's Water Music (composed for an event that took place on the water) and Telemann's Water Music, which was more of a creative response to the water itself.

This is a fascinating insight into the power and nature of the tide and it very effectively synthesizes knowledge from many different areas. However, I would have liked more coverage of the environmental issues affecting our oceans, particularly plastic pollution.

The part of the Southeast US coastline, from south of Charleston to St Mary's Georgia (known as a blight) has the highest tides on the east coast south of Nova Scotia--at times the tides were at 10 feet, and regular tides at around 7 feet. I grew up in the NC coast where the tides are only 3 feet. It's interesting the difference such tides make--I could paddle against a tide in NC, but in GA when it was the strongest, you could barely make headway paddling against it. Interesting about how in Rome, Geece and Egypt the tides were not very strong.

As for songs, you gotta add Otis Redding's, "Sitting on the Dock of the Bay, watching the tide roll away..."

Great book and subject! Where I live, in the Salish Sea, surf smelt and sand lance - both like grunion - come in large schools and lay millions of eggs at high tides. There is a very large corp of scientists and volunteers and agencies that work to find and monitor the good spawning beaches and protect them from the endless urge of development. These are Forage fish and among other things important food for salmon which in turn are the food for our "resident" orca (killer) whales - some 74 of them now - that only eat fish. Lots and lots of all sorts of efforts and publicity to try to save this group from extinction. So - always inspiring to hear of other activity around the world aimed at saving and improving our shore side environments!

I thought I had commented here... :( This book sounds interesting. While I have moved into the mountains, for a good part of my life I have lived near salt water and tidal areas. The Atlantic Blight, where Georgia is (the coastline dips inward) creates the highest tides on the east coast south of Nova Scotia. With extreme tides (around 10 feet) the current at its peak was so strong you couldn't easily paddle against it. Tides also had to be factored into strategy when racing sailboats (do you stay out in the middle where the wind is better but the tide is stronger or do you hug the short, hoping for eddies to propel you forward and knowing the wind wouldn't be as strong).

Hi Jeff, yes tides can make huge differences, and as a sailor you must know lots about that!

Rabbit's Guy - that's interesting to know, good that people are looking after the fish and whales.

Jeff - you had commented and your comment is now visible, i just hadn't kept up with publishing comments quickly enough!

Sounds great, thanks for sharing the book review.
Take care, enjoy your weekend!