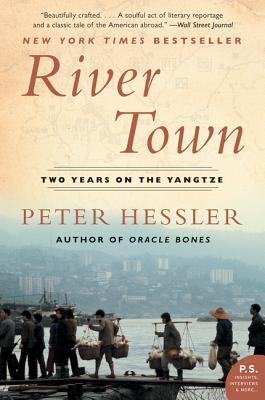 This was an entirely serendipitous book finding, it was sitting in the bargain bin at a local second hand shop and I thought 'why not?'. It turned out to be an excellent purchase.

Peter Hessler is a staff writer at The New Yorker, where he served as Beijing correspondent from 2000-2007. This book recounts his first experiences of China when he served as a Peace Corps volunteer teaching English Literature in Fuling.

The main reason I like this book is because I can see my own experiences as a VSO (Voluntary Service Overseas) volunteer teaching sciences in Malawi reflected in his experiences. Malawi and China are very different countries but the experience of working for two years in an educational setting are in many ways similar.

I was also particularly struck by how much Hessler became as Chinese as he could over the two years, immersing himself in the language and local culture. Some people have criticised the book for his sometimes lack of understanding of Chinese culture, but when you have just arrived in a country that is culturally very different than your own then you are hit by culture shock and some aspects of your new every day life are overwhelming, annoying or even distasteful and I admire Hessler's honesty about this.

From an environmental point of view, the most interesting thing in the book is the section about the Three Gorges Dam, which is, in the book, yet to be constructed. On one occasion, Hessler goes along the Yangtze in a tourist boat offering last chance tours of the part of the river that will be lost to the dam. People living in the towns that are due to be lost to the waters seem strangely calm about losing their homes and unconcerned about the environmental impact of the dam, whether loss of wildlife, loss of farmland or potential concerns about what happens if the dam were to burst?

If you're interested in China or in the Peace Corps / VSO volunteering experience this is an excellent book. Hessler weaves together his own personal experiences with information about history and Chinese culture in an entirely readable way.

Sounds of interest and will look out for this book.

My dad, for some reason, has always wanted to travel on the Yangtze River, so I gave him this book a number of years ago as a gift. The last time I was home, he gave it back (saying he'd only read a part of it), but I left it there... It does sound interesting.