Worlds End - a comic about climate change and capitalism 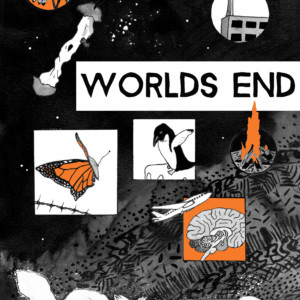 'Doom, despair, denial, depression, IT’S THE END OF THE WORLD!!!!

These are common reactions when people learn about the reality of climate change.

Similarly, sometimes when people think about capitalism it can seem as though nothing can be done to change it, that it’s too big, too strong, that maybe that’s just the way the world is.

This is a comic about climate change, capitalism and change. Designed to change people's minds and build our power to defeat capitalism and stop climate change in its tracks. The narrative draws out the links between capitalism and climate change and explores how we can only hope to stop climate change if we dismantle capitalism. It's beautifully drawn (the highlight for me being a fox chasing a hare through the whole publication from beginning to end) and uncompromisingly written. My only negative response is that it isn't specific enough. We don't just need to know that if we rise up and organise that people power can topple capitalism, we need some concrete, specific ideas of how exactly to do this.We also need some ideas on what economic system could replace capitalism, because communism hasn't exactly worked too well for the environment.

Worlds End is however a starting point, a rallying call and a very timely publication in the current awareness of climate change in the light of the actions of the school strikes and Extinction Rebellion.

World's End is available from Corporate Watch as a free download or to order as a paper magazine. Find out more here.

Disclaimer: I was sent a free copy of this publication.
Crafted by Crafty Green Poet at 7:26 am