Woodlands are Landscapes Rich in Wildlife - Let's Keep Them That Way

The Woodland Trust first called for a Tree Charter in the United Kingdom in 2015 in response to the crisis facing trees and woods in the UK.

The Tree Charter was launched on 6 November 2017, the 800th anniversary of the 1217 Charter of the Forest (which protected the rights of free men in England to access and use the Royal Forests which had been set aside as the King’s hunting grounds).

You can find out more about the Tree Charter here and sign up to it's principles here.

One of the principles of the Tree Charter is to Sustain Landscapes Rich in Wildlife. This is the theme of the charter for April.

Natural forests and woodlands, especially ancient woodlands that have been continuously tree covered for centuries, are wonderful places for wildlife. The ground is covered with flowers in the Spring before the trees are fully in leaf, offering early food for pollinators. The trees themselves are full of great nesting places for birds, squirrels and invertebrates. The leaves, flowers and fruit of the trees are great food sources for a huge variety of creatures. The trees are valuable for wildlife even after they die, as fungi then grow all over them and invertebrates make their homes in the decaying wood.

It's this wonderful variety of wildlife that makes woodlands like the Dells along the Water of Leith such a wonderful place to walk. 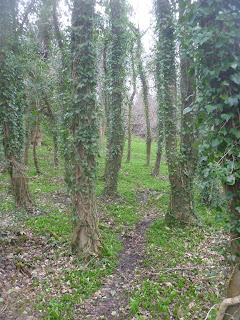 Not everyone values trees though, I've blogged in the recent past about trees being chopped down as part of the process of building a new Meadowbank Stadium in Edinburgh and have just found out that Scotmid have apparently destroyed ten trees in a community garden behind their store in Gorgie Road as part of preparations to build a new store and student flats on the site. The land as far as I know does not belong to Scotmid and it is illegal to chop down trees during the bird nesting season (apparently birds nests were found on the ground after these trees were destroyed). I won't be shopping at Scotmid again (not that I often do). (to object to this development visit the Edinburgh council planning portal http://www.edinburgh.gov.uk/…/view_and_comment_on_planning_… and search for 236 Gorgie Road, click on the application forthat address dated 20 February click on the comments box and then leave your views. Closing date is 8 April).

Further afield and on a larger scale HS2 the high speed rail project will have a devastating effect on ancient woodlands along its route through England. This will destroy irreplaceable woodlands that are rich in wildlife and loved by local people as places to walk and relax. (Read more about HS2 here).

So a Tree Charter that protects woodlands for their wildlife value is vital to the future of our wild places and biodiversity. You can sign the charter here.

****
If you're in Edinburgh on Saturday 13 April, you may want to come along to the Wild Day Out that is happening in Holyrood Park as part of the Edinburgh International Science Festival. Organised by Historic Environment Scotland and RSPB Scotland, there will be loads of activities for all ages and at 10.45 you will be able to join me and one of the park rangers for a guided walk.
Crafted by Crafty Green Poet at 11:03 am

Email ThisBlogThis!Share to TwitterShare to FacebookShare to Pinterest
Thinking about: campaigning, Water of Leith, woodland trust

Yes, we must all do our part to keep the woodlands protected. Wishing you a happy day!

Keep it up - everyone just has to keep after the desires to destroy nature for money.