The bluebells are starting to bloom in the Dells, alongside the Water of Leith. 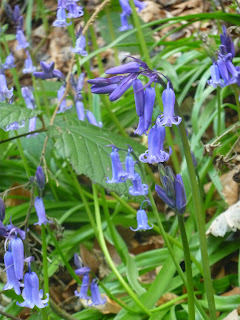 These are almost certainly hybrids between the native British bluebell and the introduced Spanish bluebell. According to official records there are pure native bluebells in the Dells, but I've never found any that entirely convince me of them being purebred. (Here is an old but still relevant article about bluebell hybridisation).

It's probably a couple of weeks until the bluebells will be at their best, but the celandines are already at their best and seem to be everywhere at the moment. They look lovely festooned on these trees 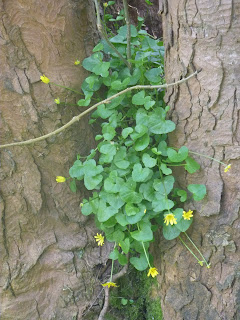 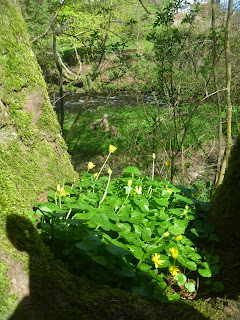 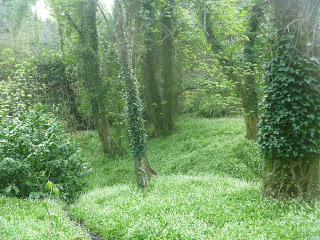 It has very unusual looking flowers 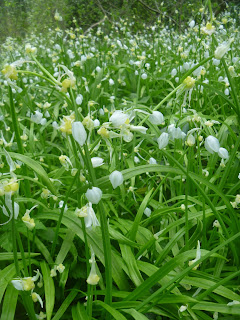 Few flowered leek may look lovely but it is a non native invasive plant that can totally take over and crowd out native plants (read more here). One suggestion for controlling it's spread is to forage it, you can make delicious pesto from its leaves. The main plant that this leek is displacing in parts of the Dells is the wild garlic, which isn't yet in flower but soon will be and is already smelling like, well, garlic 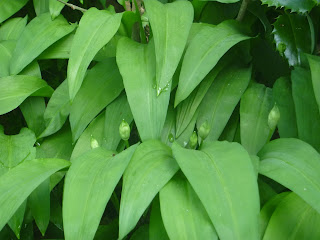 You can also make adelicious pesto from wild garlic, but in the interests of conserving native species, I'd suggest foraging the wild leeks instead. Also in areas such as the Dells there are so many dogs running around that you may not want to forage anything from the undergrowth! 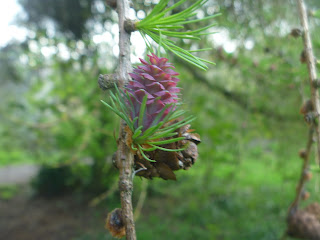 I was sad to see that large areas of ivy havebeen cleared from Spylaw Park. I understand that ivy can damage walls but it's a great habitat and food source for bees and hoverflies, specially when it gets to autumn.

Email ThisBlogThis!Share to TwitterShare to FacebookShare to Pinterest
Thinking about: In and around Edinburgh, nature diary, photos, Spring, Water of Leith

Dogs would definitely spoil wild foraging for me! But it was most interesting to learn what you could do with those plants if able to find them in pristine locations. The bluebells are beautiful.

It looks like the ivy on the trees has been cut at about eye height, and then everything below pulled away and out. The ivy on the tree will then turn brown and no longer live - if all the vines are cut! It is invasive here and crowds out a lot of native woodland plants that are also good for bees and birds and so much effort is taken to remove it. There is a theory that it will eventually kill the trees it grows up, but I don't think anyone around here is sure of that.

Hi Rabbit's Guy, the specific bit of ivy that has been removed is on a wall and isn't overcrowding any undergrowth, also it gets lots of sunshine and attracts more bees and hoverflies than surrounding vegetation. You're right though ivy can definitely cause problems.

Even those non-native are beautiful but not when they push out the natives....love the bluebells.

I love the bluebells! And the garlic is beautiful, too. I always love your rambles.