I've just discovered that 8 April is Draw a Bird Day!

In 1943, & year old Dorie Cooper went to hospital to visit her uncle who had been wounded in the war. She asked him to draw a bird which he did. The event cheered up her uncle and other soldiers in the hospital. From then on, whenever Dorie visited, they competed to see who could draw the best bird pictures. Within a few months, the  ward's walls were covered by bird drawings.

3 years later, Dorie was killed in a car accident. Her coffin was filled with drawings of birds by soldiers, nurses and doctors from her uncle's ward. Ever since then, they remembered the girl who brought hope to the ward by drawing birds on her birthday, April 8th.

I'm better at drawing rabbits, but here's today's bird picture. It's pretty basic and not intended as an identification guide! 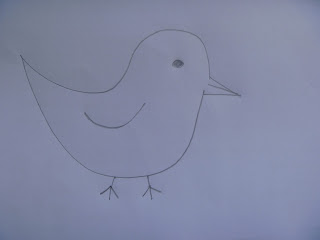 You can find out more about Draw a Bird Day here.

If you have any bird drawings that you'd like to share, feel free to leave links to them in the comments section below!
Crafted by Crafty Green Poet at 10:24 am

Email ThisBlogThis!Share to TwitterShare to FacebookShare to Pinterest
Thinking about: birds

I love your drawing. And Dorie sounds like a love - so sorry to hear of her untimely passing. What a wonderful tribute they made to her at her service.

I love your drawing and wonderful to read about Dorie Cooper.