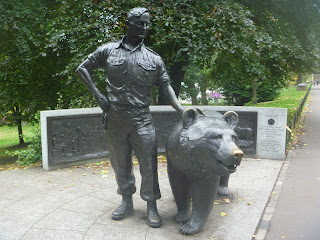 Wojtek was a bear, rescued as a cub, from a cruel fate as a dancing bear in Iran by Polish soldiers who then kept him as a mascot, friend and helper.

This memorial statue, by Alan Beattie Herriot, recently placed in Edinburgh's Princes Street Gardens is a wonderful tribute to a brave and characterful bear (though I do find it astonishing that Edinburgh has far more statues to animals than it does to women). 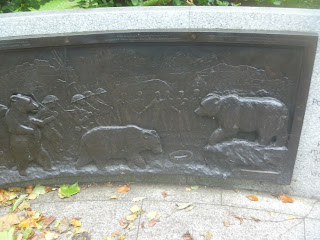 Seeing the statue made me want to find out more about Wojtek and so I was delighted to discover Wojtek the Bear, Polish War Hero a book by Aileen Orr. This entertaining, informative and moving book follows Wojtek from his initial rescue in Iran, through his life in the Polish army during the 2nd World War and in a camp in the Scottish Borders to his last years in Edinburgh Zoo (where one of his keepers was Crafty Green Boyfriend's Dad!) Wojtek truly was a hero, he helped carry supplies, caught a spy and was a huge morale boost for the troops. He loved swimming, making friends, dancing at local dances in the Scottish Borders and eating. He drank beer and smoked cigarettes.

As well as telling Wojtek's story, the book outlines Polish history during the war and immediately  afterwards, the terrible suffering of Poland during the war at the hands of both the Germans and the Russians. The book concludes by telling the story of the author's campaign to get the statue to Wojtek erected in Edinburgh.

Crafted by Crafty Green Poet at 9:46 am

Email ThisBlogThis!Share to TwitterShare to FacebookShare to Pinterest
Thinking about: books, In and around Edinburgh, review

Not long ago there was a brown bear, somebody somewhere decided he should be called called Bruno and the name stuck. Bruno walked from Slovenia to Italy and from there into Switzerland followed by a visit to Austria to finally arrive in Germany. An amazing crossing of the Alps completed in just a few weeks. In Germany Bruno was shot dead for killing a sheep or two, or some serious crime of that nature. He was suitably stuffed. He taken to a museum. Maybe he's still there. It's all as I remember it. I haven't the heart to check the facts. It's a tragedy. What kind of people is man?

AWwwwwww ... how nice a find and surely a good read - even if about terrible times and acts

he deserves a statue I think