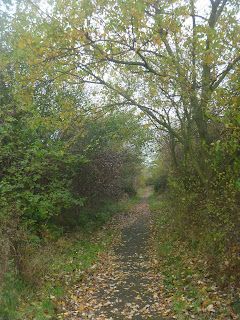 The autumn colours are still beautiful along the wooded paths leading to Musselburgh Lagoons. This tranquil scene though hides a much more frenetic world on the Lagoons themselves!

The oystercatchers had gathered in their hundreds in a large crowd on the lagoons, along with a few curlews. They were hopping around unconcernedly as a peregrine circled overhead, divebombing the oystercatchers then flying up again to repeat the whole process. I think the apparent lack of concern from the oystercatchers' point of view was due to them knowing that if they flew off  then the peregrine would have a better chance of catching one of them - though an adult oystercatcher seems a rather large meal for a peregrine (can anyone comment on that?). After several minutes the peregrine flew off without a meal.

Later as I was walking along the River Esk returning to Musselburgh town, I saw a kingfisher flash blue under the bridge.

Then I managed to catch this cute goose, a cross between a Canada goose and a greylag (in the second photo you can see a Canada goose to the right of the photo). You often see these hybrid geese at Musselburgh. 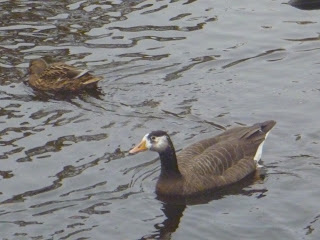 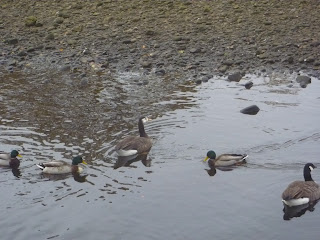 Great shots of the geese. The Peregrine is a wonderful sighting. Enjoy your day!

you'd think they might be too big, but not sure - we have falcons eating small crested pigeons around here, but usually when they have been injured and are vulnerable

Gabrielle - I thought about it a bit more and peregrines eat woodpigeons which are the same body size as oystercatchers, it's just the oystercatchers long bills and legs make them look much larger.