Update on the Swift Survey 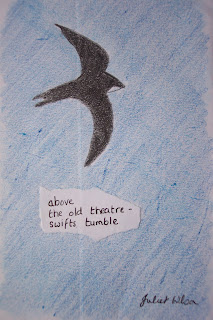 As some of you may remember I took part in this year's swift survey, carried out in Edinburgh by the Royal Society for the Protection of Birds (RSPB). These lovely birds have been declining drastically over the last few years and the survey is part of a programme to determine how we can help swifts recover in Edinburgh. You can read my earlier posts about the survey here, here and here.

Last night, the RSPB held a follow up event, where they shared some of the results from the survey and laid out plans for what might happen next. Not everyone who signed up for the survey has yet returned their results so the discussions were based on incomplete data. Twenty seven screaming parties of swifts were seen across Edinburgh (screaming parties are groups of swifts that gather together to fly low over the roofs, usually near their nest sites and are a good indication of breeding colonies.)

Nine nest sites were identified in total (including one that Crafty Green Boyfriend and I found very close to our own flat!). This may not sound like many, but swifts prefer to live in the backgreens behind buildings and so often their nests are only seen by the people who live round that backgreen, as you can only generally access the backgreens through the buildings. We were actually delighted to indentify our nest site, as we had always thought that all our local swifts nested in the backgreen across the road (apart from one pair that nested in our own backgreen).

In the future, the RSPB will carry out more detailed surveys of the areas where they now know that swifts currently nest. They will also work with the local council to ensure as many swift bricks (nest boxes that can be built into a building during construction) are fitted to new build homes and offices. They also hope that Edinburgh can become a future swift city (following on from the model of Oxford).

It was great to catch up on the progress of the project and it was also a very sociable evening and a chance to chat about my favourite bird with other people who share my interest!
Crafted by Crafty Green Poet at 7:58 am

Email ThisBlogThis!Share to TwitterShare to FacebookShare to Pinterest
Thinking about: birds, campaigning, In and around Edinburgh, nature diary

Our swifts here had a really good season, end of summer we had flocks of several dozen birds milling about. We have about 6 nest sites I can think of in town, some near me, been great to watch them