An Autumn of Butterflies!

Butterfly Conservation have been saying for weeks that we might be in for a great autumn for butterflies, following a mediocre summer (though when we were in Dumfries and Galloway recently we saw more butterflies than we've ever seen anywhere ever, see for example this post).

Earlier this month, Butterfly Conservation said, and I quote from this article: 'We may be poised for an impressive autumnal emergence of species such as Comma, Red Admiral and Speckled Wood in the coming weeks'.

Well yesterday I was lucky to get very close views of a red admiral in Spylaw Park and today it was the turn of the speckled woods. There were at least four of these lovely butterflies flying around the trees alongside Musselburgh Lagoons, though there may have been six altogether, chasing each other. Only two agreed to be photographed 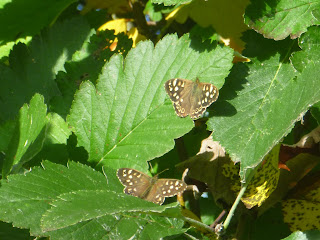 So all I need now are the commas, which have been remarkably elusive all this year, despite moving into Scotland from further south over the past few years.
Crafted by Crafty Green Poet at 1:31 pm

Email ThisBlogThis!Share to TwitterShare to FacebookShare to Pinterest
Thinking about: autumn, In and around Edinburgh, nature diary, summer

They are so beautiful and delicate looking!

Oh I am happy that you will probably be seeing butterflies... Michelle

How exciting to see butterflies in numbers. I hope you get to see lots more of them.