The Importance of Naming

It's wonderful to go out and enjoy nature at all times, whether or not you know the names of the species you're looking at. But it's also important to learn the names, partly because that means you can help conservationists know how widespread a species is and so inform conservation action but also because it helps you to learn more about nature. One of the things that I love about nature in fact is that there is always something new to find out. I first became interested in hoverflies, for instance, a few years ago, when I happened to notice and photograph a species I'd never noticed before. Soon after that I began to notice the diversity of hoverflies around Edinburgh and joined the UK Hoverfly Facebook Group, which if you're interested in hoverflies is well worth joining if you're on Facebook.

There are around 250 species of hoverfly in the UK, which certainly gives you something new to learn every day through the warmer months! 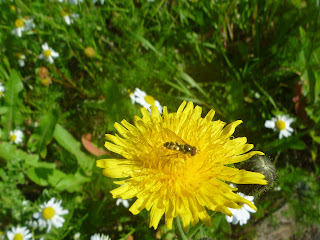 which, according to the UK Hoverfly Facebook group is Dasysyrphus albostriatus, which according to the UK map on this page, has rarely been recorded in Scotland and never in East Lothian. It is likely that this is due to the species being under-recorded, rather than actually being rare. There are relatively few hoverfly recorders in Scotland, so if you're in the country and interested in hoverflies this is something you might like to take on!

Edited to add: I'm not suggesting that everyone should get involved in recording hoverflies, this is just the group of insects I've become interested in over the past few years. You may prefer wasps or bees or prefer not to look in detail at insects at all!

There's a great article here: Why I Obsess about the Names of Plants and Animals, well worth a read.

Email ThisBlogThis!Share to TwitterShare to FacebookShare to Pinterest
Thinking about: nature diary, summer

Ha ha hoverflies to me are either marmalde, footballer, bombylans or, err, hornet. That's about as much as I can take.

Pfft, 250 species of hoverflies......and then I should learn their Latin names. Too much for my brains, I only know lots of plant names and tropical fish names, because we used to have an aquarium shop in the past.

Simon - they can be confusing, but the closer you look the easier they get,

Janneke - I'm not actually suggesting everyone should start identifying hoverflies,

That's so true about the naming Juliet and once you've spotted a few features it gets easier. First you name a plant or creature, then you know them and they become part of your landscape, then you love and protect them! Every child should get a chance to do it, and the earlier the better!

Latin names are fine, but common names are just as good if they're available.

Hi Jamie, you're very right and as to Latin names, I prefer common names if they're available (though Latin are more precise of course)

Wow, you must be one of those people to whom we owe thousands of thanks because you are so much into nature and preservation of nature. Great poat.

I have heard it said that you do not know something until you have named it.

The latin does make it hard!!!