Our lovely cactus is just coming into bloom! 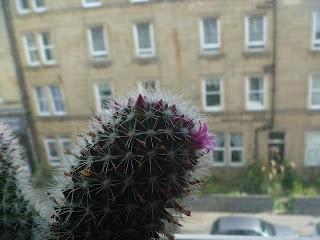 This cactus once  grew so tall and at such an angle that it kept falling over. So we chopped its top off and then later it grew back an extra four tops. It still leans at a funny angle but no longer generally falls over. It did however once fall over and roll under the television and sat there for a day before we noticed it. Since then it has behaved well and sat nicely on the windowsill. It never used to flower but has done so for the last several years, I suspect something about chopping its top off stimulated its flowering. Click here for some photos of the cactus in full bloom a couple of years ago.

Meanwhile I cleaned the living room windows today, we're three floors up which makes it a slightly daunting task for someone with no head for heights (window cleaners round here don't do upper floor windows in the traditional old buildings like ours). I clean the windows every year at this time, because that means I can see the swifts better! The highest number we've seen from the living room this year so far is six, though that will increase over the summer. Still the numbers are overall down on a few years ago.
Crafted by Crafty Green Poet at 12:19 pm

Email ThisBlogThis!Share to TwitterShare to FacebookShare to Pinterest
Thinking about: In and around Edinburgh, Spring

I know what you mean about heights...I get vertigo like anything! One flock of about 15 swifts I've seen here.

Blooming cactus is really great! Such a hope it displays.

That looks a pretty colour petal too!

It's beautiful - such personality!

That is such a beautiful cactus. :-)

lovely cactus - don't envy you cleaning those windows though

A lovely cactus - I used to have a mini collection. They are such unusual plants, and as you intimate, their flowers can be quite beautiful. So glad you can now watch the Swifts through shiny windows, Juliet!