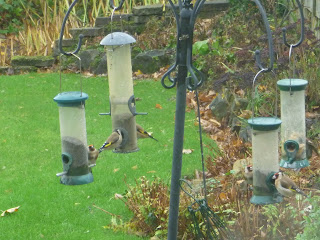 I went to an excellent event today - a lunchtime talk on goldfinches to tie in with the loan of Carel Fabritius' painting The Goldfinch to the National Galleries of Scotland. Both speakers were entertaining, humorous and informative.

(For my American readers, let me make it clear that we're talking about the European goldfinch (seen above on feeders in my parents' garden) which is found in the UK and across Europe and has been introduced into New Zealand and parts of Australia. (Some of what you read here won't make sense if you're thinking about the American goldfinch!).)

First up, Mike Fraser, Conservation Officer with the Royal Society for the Protection of Birds (RSPB) spoke. He started by talking a little about goldfinch ecology and how to tell the males from the females (you need to check the colour of the hairs in their nostrils to be absolutely sure, apparently!). He then took us on a quick tour of goldfinches in religious art! The goldfinch, is one of a group of European birds that have red patches (the others include robins, swallows and even linnets) and were therefore traditionally believed to have tried to remove the crown of thorns from Christ's head so they are used symbolically in a lot of old religious paintings, particularly in Madonna and child paintings. They have also been very popular caged birds and appear in some Dutch paintings in that context (including the Fabritius painting), not to mention monstrous goldfinches in Hieronymus Bosch's Garden of Earthly Delights. Now whenever I'm in an art gallery I'll be looking for goldfinches in unexpected places!

Next up was Ben Darvill of the British Trust for Ornithology (BTO) who gave a very entertaining talk on garden birdsong, including some very memorable ways of remembering the songs of common birds. This was followed by a quick quiz and luckily I was able to identify all the birdsongs correctly!

Edited to add - here's an excellent article from the BBC about Fabritius' painting The Goldfinch.

They are pretty birds. I can see that they are related to our small yellow and olive birds. You find the such interesting things to do.

Plenty of them in their little winter flocks whenever I go running. Tweeping away.

Very interesting. I shall look closer for birds in art. Thanks also for the link Hieronymus Bosch's Garden of Earthly Delights. Loved the in depth commentary.

The distelfink of Pennsylvania hex sign art I think! They are on our big one along with rabbits!!!

They are quite lovely! And different than ours!

I do love my American goldfinches. So beautiful - I miss them during the winter.

My book club read the novel, The Goldfinch by Donna Tartt, which was based on that painting you speak of, I think. It was very good.

I'll bet that was a wonderful lecture.

Such pretty birds, I love their colouring.