We both went to Figgate Park today, Crafty Green Boyfriend was keen to see and photograph the male mandarin that has been hanging out on the Figgate Pond for the last few days (you can see moy photos from yesterday here). We were lucky that the mandarin was posing on the pond as soon as we got there though it moved away for a while before Crafty Green Boyfriend could get any photos. The bird spent equal amounts of time posing for the cameras (and there were a lot of photographers at the pond today!) 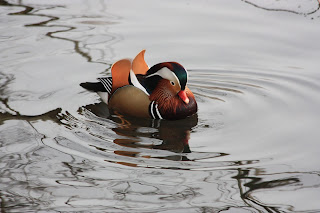 trying to impress the female mallards 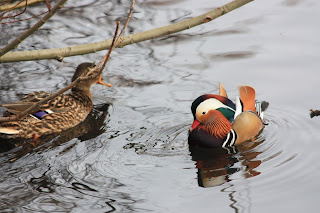 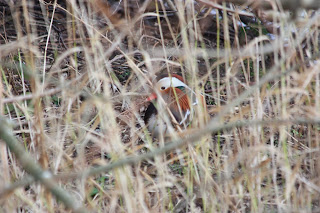 What a delightful sight and a real rarity in Edinburgh (the mandarin was first brought to the UK as an ornamental species from China but has escaped and now breeds in certain parts of the UK).

Crafty Green Boyfriend has a much stronger lens on his camera and was able to capture good photos of the gadwall, a duck at the opposite end of the spectrum to the mandarin, with it's subtly beautiful grey plumage and smart black beak 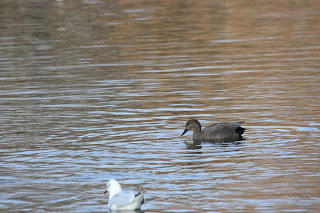 The tufted ducks were looking fine today as well, the males have such marvellous tufts on their heads at this time of year 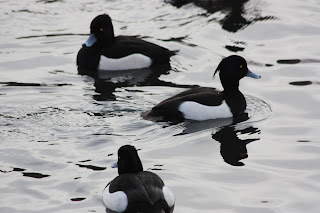 Also several goosanders on the pond, including this female 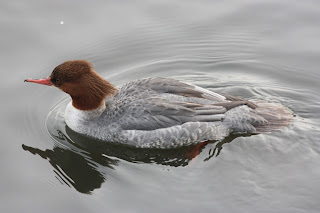 Thanks to Crafty Green Boyfriend for taking all these photos!

That duck is a beauty!

They are dressed to impress!

These photos just make my heart happy. We have wood ducks, and the occasional loon, but we're mostly awash in mallards, pintails, coots, and moorhens. They're lovely, but they're nothing like this!

I absolutely love those stunning ducks - the standout colours!

Hello, these are awesome shots of the Mandarin Duck, Merganser and the Tufted Ducks. They are all great sightings. Happy Sunday, enjoy your new week ahead!