I last saw a mandarin drake many years ago on a family holiday in Cornwall, where there was one in a collection somewhere. So when I recently heard that a male mandarin had appeared at Figgate Park, I was keen to get along and see him for myself.

Someone from one of my birdwatching classes had said he'd spent twenty minutes recently wandering round the pond and didn't see the mandarin! I was much luckier, in fact he came right up to me immediately and posed for some photos 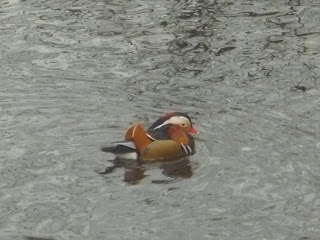 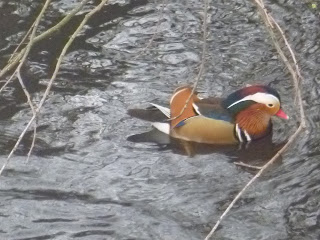 This must be the showiest duck in the world, it looks too fancy to be real! Someone else who was taking photos of the mandarin said to me "do you think the other ducks are jealous of the attention he's getting?" The shoveler certainly seemed to be, he was hiding in a bush and refused to come out onto the water!

At the other end of the spectrum from the mandarin is the soberly elegant and subtly beautiful gadwall, which was also present on the Figgate Pond today. It wasn't quite so keen to be photographed but you can see him here in this rather poor quality photo - the gadwall is the one on the right, next to a female tufted duck with a female mallard in the background. 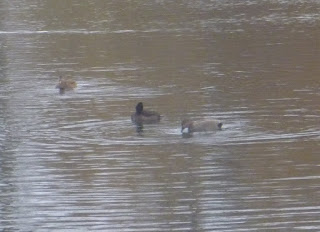 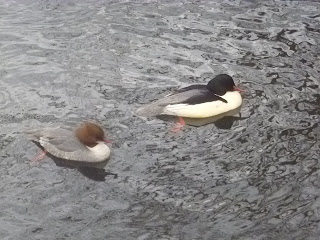 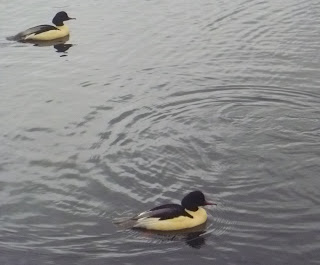 The tufted duck males were gathering in the hopes of impressing the very unimpressed female (on the left, with her head tucked under her wing!) 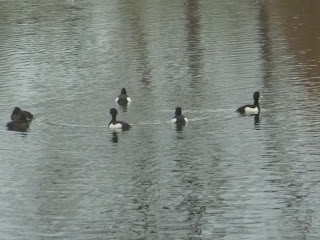 I was also delighted to hear a mistle thrush singing from the top of a tree, the first one of the year.

As ever, red text contains hyperlinks that take you to other webpages where you can find out more.
Crafted by Crafty Green Poet at 2:06 pm

Great sighting, the manderin duck is pretty. I like all the ducks, great photos.
Happy Friday, enjoy your weekend!

Gadwall need a really good look to appreciate the subtle plumage, I've only ever seen one but got a decent look in 10x50s. Mandarins (always used to be mandarin teal, I'm sure) are a bird I've never seen. Suspect they are all descendants of escapees in this country.

Hi everyone thanks for the comments

Simon - yes there are about 3000 pairs in this country, all descendents of mandarins brought in as ornamentals! Gadwall are beautiful when you look closely, and my photo hardly does the bird justice as the light was poor and the duck was too far away!