It was sunny today when I joined Crafty Green Boyfriend for a lunchtime wander round Corstorphine HIll (which is conveniently across the road from his office!). We picked quite a few raspberries, which his Mum (who we unexpectedly met on the hill, also picking raspberries!) will make into jam.

There were lots of butterflies around, enjoying the sun - we saw ten meadow browns, a few ringlets, a small tortoiseshell and a red admiral, all of which we will record for the Big Butterfly Count.

We also saw a lot of honeybees injoying the rosebay willowherb, there must be a hive somewhere nearby, as it's very unusual, speically these days to see so many honey bees all in one place! There were also lots of bumble bees about, which is more of a common sight, lovely to hear them buzzing away as they gather nectar and pollen.

None of these insects were happy to be photographed apart from this small tortoiseshell, who allowed me to take quite a few photos, though none of them are particularly good 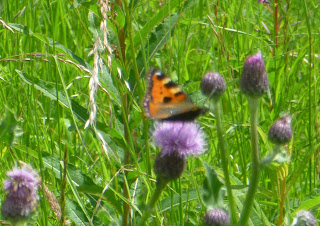 These caterpillars were happy to be photographed (look carefully and you can see the caterpillars inside the 'web'). Thanks to Edinburgh Natural History Society Facebook Group, I think these are parsnip moths. 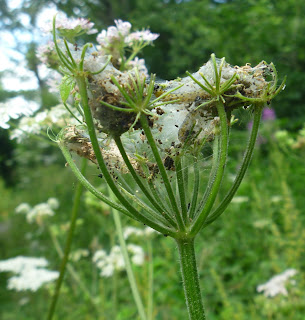 This wood mouse was happy to be photographed, though I suspect that was because it isn't very well 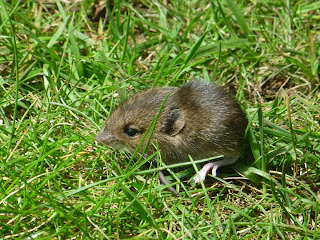 This smashed snail shell on a rock is probably a song thrush's anvil, where the bird will smash up snails and eat them. 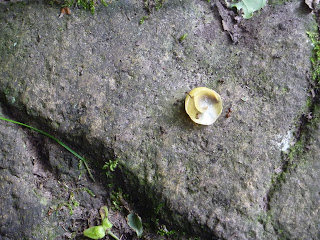 The air was full of the sounds of summer too, grasshoppers in the grass and the gorse bushes were popping in the heat, as the seed heads opened explosively to let the seeds out 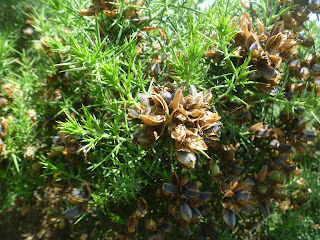 The red campion seed heads are ripening too, if you look carefully you might be able to see the tiny seeds on the front seedhead in the photo below 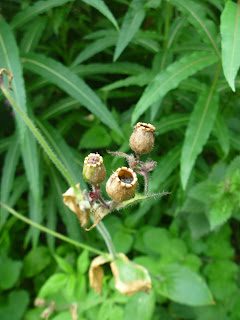 The puff ball fungi are up. 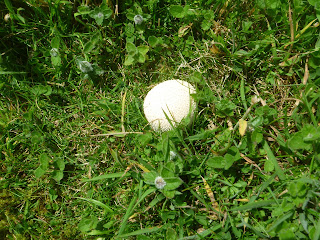 We were very happy to see a couple of young rabbits in their traditional place in front of the hotel on Corstorphine Road, next to the zoo, (and just next to the bus stop!) only one stayed round to be photographed though 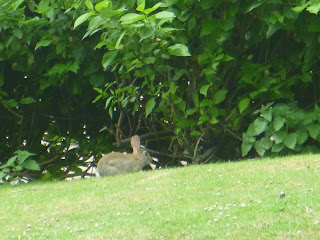 Three swallows were flying round here too, they seem to be nesting in the abandoned building across the road from the hotel. I don't think the bunny noticed them though!
Crafted by Crafty Green Poet at 3:08 pm

Email ThisBlogThis!Share to TwitterShare to FacebookShare to Pinterest
Thinking about: birds, In and around Edinburgh, nature diary, rabbits, summer

Looks like a wonderful walk. The raspberries are looking delicious here. I love the cute mouse and the bunny. I love watching the swallows, great post and images. Have a happy weekend!

Beautiful post and photographs, it is great to see there are some beautiful green spaces left free for nature to flourish, and that you get to enjoy them with your other half. Really enjoyed reading this. Thank you!

A few years ago, I came upon a mouse being eaten by a snake--with me in the neighborhood taking photos, the snake let go of his grip, the mouse tried to run away, the snake bite him, rolling the mouse, but decided with me watching he wasn't safe to eat, so the snake took off and the mouse looked up at me as if to say, "Thanks," and then left in the other direction... the snake, thankfully, wasn't poisonous. I thought of that encounter with your little mouse.

Nice post, some great finds on your walk today.

Looks like a great place to have a lunch time wander, and you were lucky to have good weather. In my part of the UK today we had a lot of rain. I had to smile at your mouse picture ... if you read the post on the low carb diabetic blog called 'Unexpected Visitor' you'll understand.

Lovely photo's, thanks for sharing your walk with us.

Hope you have a lovely weekend

What a wonderful lunch!

This beats a cafe anytime! What lovely bits of life.