Crafty Green Boyfriend and I went to Scotland's Big Nature Festival in Musselburgh today. The weather was perfect for this kind of event, sunny and warm, though with a breeze coming in from the sea.

The route was signposted well for cyclists 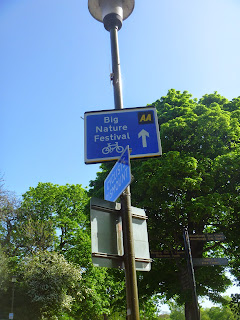 though we walked from Musselburgh along the John Muir Walkway, one of my favourite birdwatching walks.

There's lots to do and see at the Festival, including tthe lovely Wild About East Lothian Tent 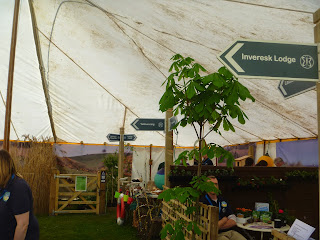 which is East Lothian in miniature, including all the main wildlife habitats found in the country, along with interactive activities, and lots of information about wildlife and the problems it faces.

The packed programme offered something for everyone. Our first stop was the Scotland's Larder tent for a demonstration from Anna Canning of Flora Medica of how to make pesto from wild greens, in this case ground elder, nettle and sticky willy (goosegrass). 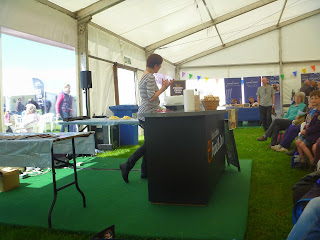 After the demonstration we sampled the pesto, which was delicious. It's also a great way to use ground elder if it's a problem weed in your garden.

Next we went to the bird ringing demonstration, where we watched bird ringers from the BTO (British Trust for Ornithology) ringing a beautiful male reed bunting. The bird is having his wing measured in the photo below. 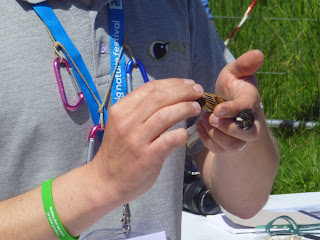 We also went to a very interesting short talk from Ben Darvill (also of the BTO) about swallows, martins and swifts in the UK. Swifts are my favourite birds and this year so far I've seen about ten of them flying above our flat. In this talk, Ben outlined how all these birds are declining in the southern parts of the UK but doing relatively well in Scotland. He packed a lot into the 20 minute slot but it would have been nice to have had longer! However that would have meant fewer talks in the programme, so there needs to be a balance!

We enjoyed browsing the various stalls and were particularly impressed by the beautiful pencil-drawn art works of Fran Knowles. We were also struck by Gill Hatcher's lovely little book, Bunny behind the Moon, about a young bunny called Wonder, who finds out that her extra large ears are picking up messages from the bunny behind the moon.

We bought lunch from the Whitmuir Organics food truck, which was delicious, but slightly messy to eat! We also enjoyed a couple of real ales from the Orkney Brewery. It's good to see the Scottish Nature Festival offering ethically produced food and drink from Scotland.

Before and after the festival, we enjoyed listening to the spring birdsong as we walked between the venue and Musselburgh, including reed buntings, skylarks, willow warbler and whitethroats. The grassy areas were full of speedwells and vetches bursting into flower (photos tomorrow) and we found this beautiful little creature 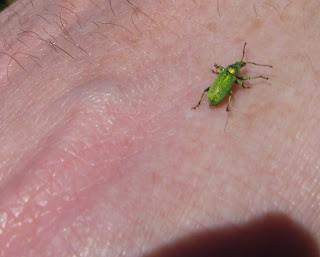 So all in all we had a wonderful time! More tomorrow, I hope.

Thanks to the RSPB (Royal Society for the Protection of Birds) for giving me a free pass to the festival!

Email ThisBlogThis!Share to TwitterShare to FacebookShare to Pinterest
Thinking about: birds, green lifestyle, In and around Edinburgh

The ales sound good--most of our festivals like that don't have such samplings.

Food, drink, entertainment, lessons to learn, things to do ... there is a recipe for a fine festival, eh?

Sounds like a full day and a delightful one.