Scone Palace is one of the most historical sites in Scotland. Fifteen hundred years ago it was the capital of the Picts. In the intervening centuries, it has been the seat of parliaments and the crowning place of the Kings of Scots, including Macbeth and Robert The Bruce. It houses an outstanding collection of antiques, paintings and rare artifacts.

For a birdwatcher, it is renowned as the Scottish stronghold of the hawfinch, a large, but surprisingly elusive, finch that has an odd preference for living in the grounds of stately homes.

On Tuesday, Crafty Green Boyfriend and I decided to walk from our B&B in Perth to Scone Palace, meet the hawfinches and catch a bus back. The walk there takes you through farm fields where yellowhammers and skylarks sing, then woodland, including along part of the lovely Quarrymill Woodland Park. We discovered a lovely woodland walk that we'd never walked before, full of elegant birches and rhododendrons, the latter which are invasive but still very pretty. 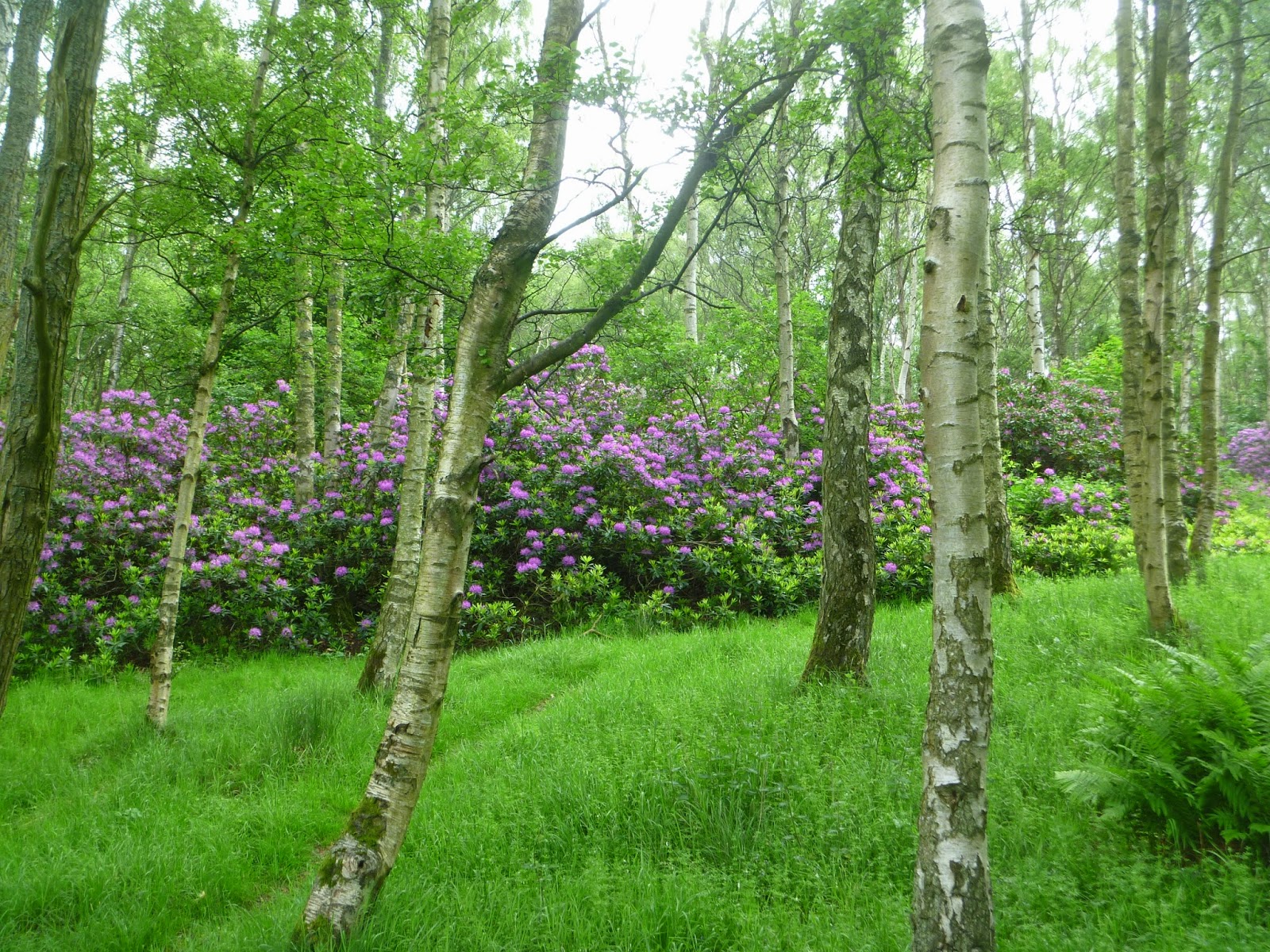 The grounds of Scone Palace are renowned for their trees.  The botanist David Douglas was born in Scone and was responsible for introducing a number of tree species to the UK, including the Douglas Fir (I didn't check, but I think the trees in this photo, taken from the David Douglas Pavilion, are Douglas Firs). 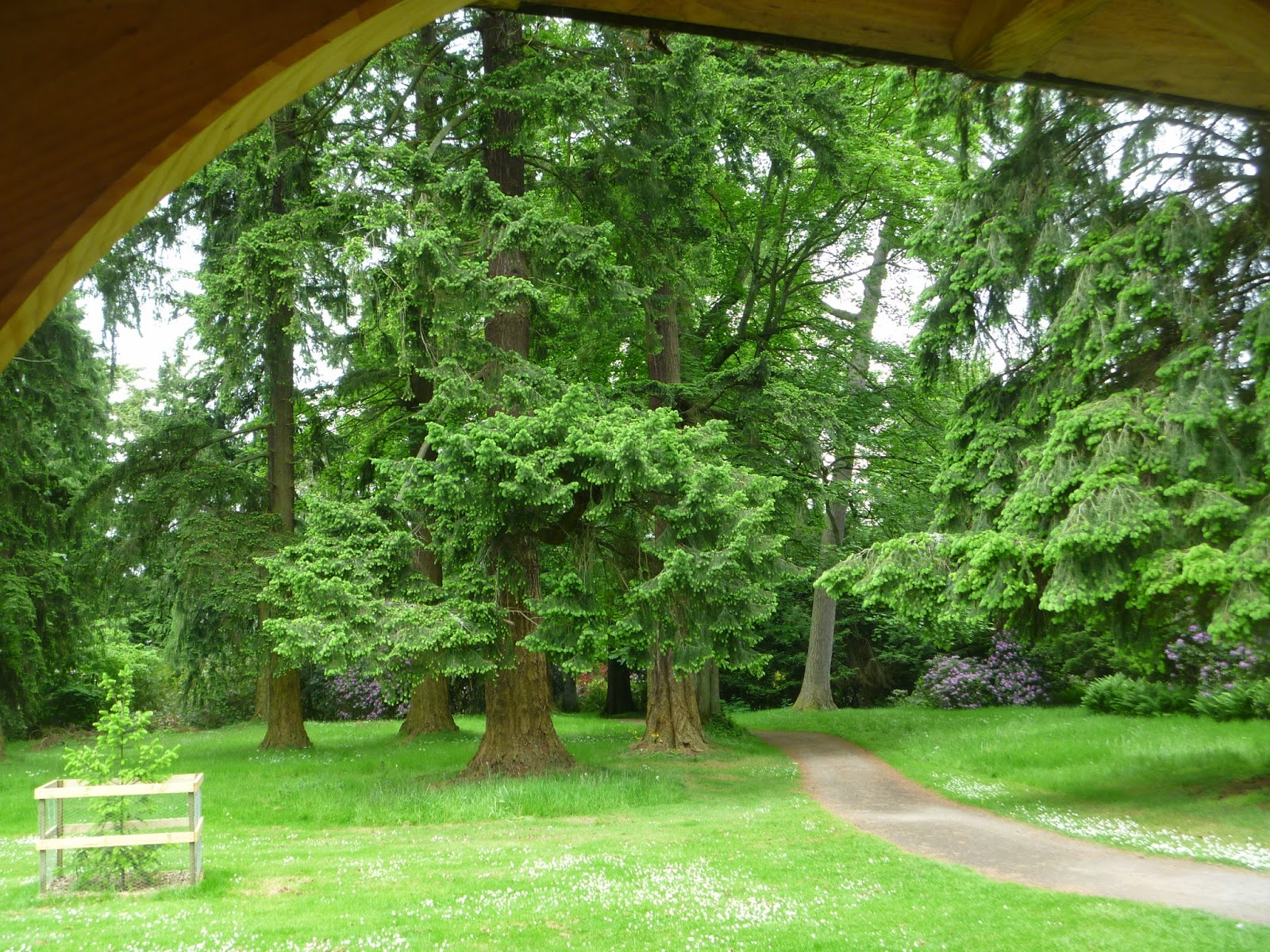 The lime (linden) trees are magnificent. 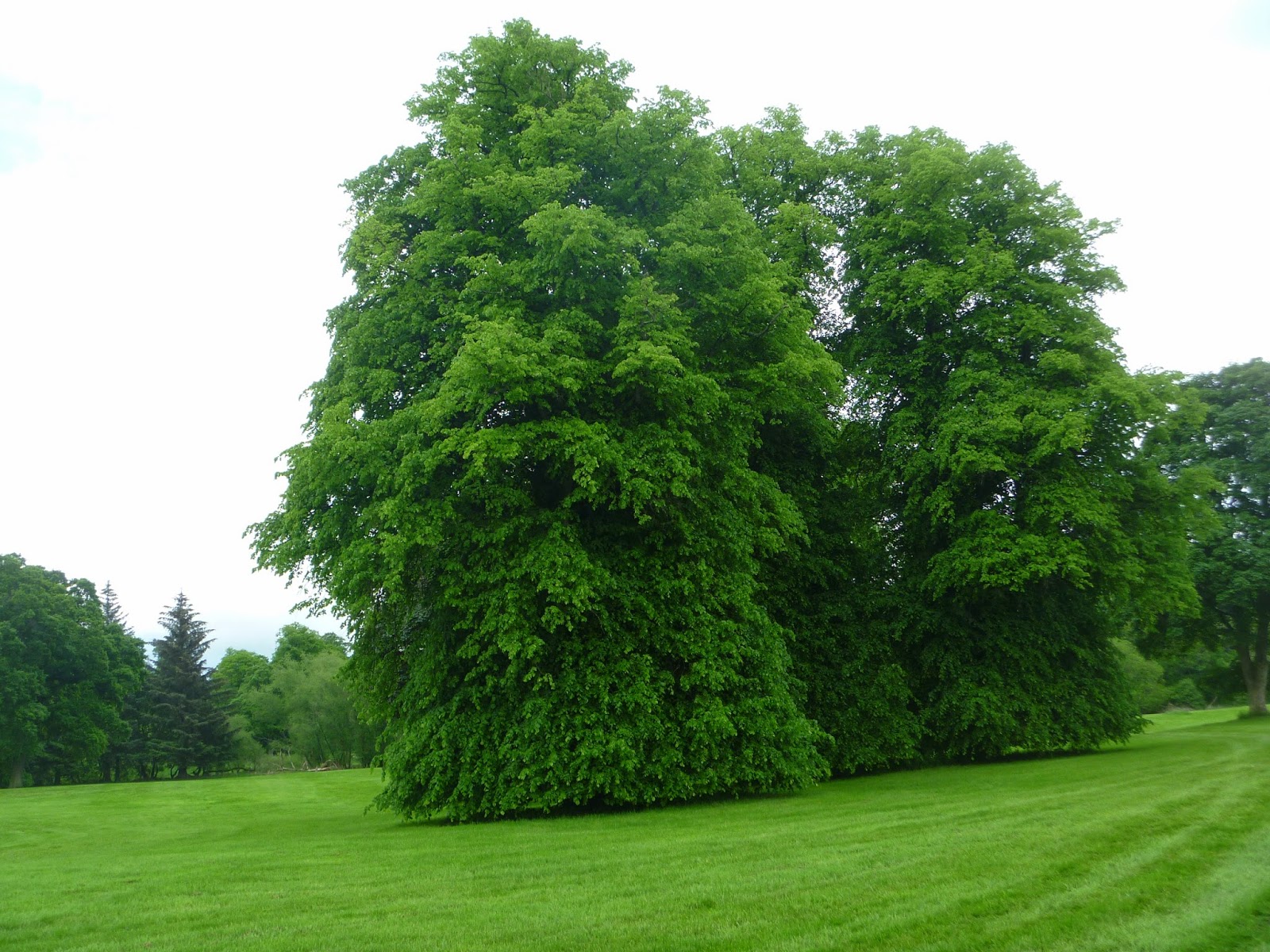 and one of the walks round the gardens has lovely views over a river, where we saw sand martins, oystercatchers and a common sandpiper among other birds.

We kept our eyes open as we wandered round, but we didn't see any hawfinches. We did however see a couple of spotted flycatchers, our first for the year and another elusive species. And we saw another yellowhammer, which Crafty Green Boyfriend caught on film (click on the photo to enlarge it). 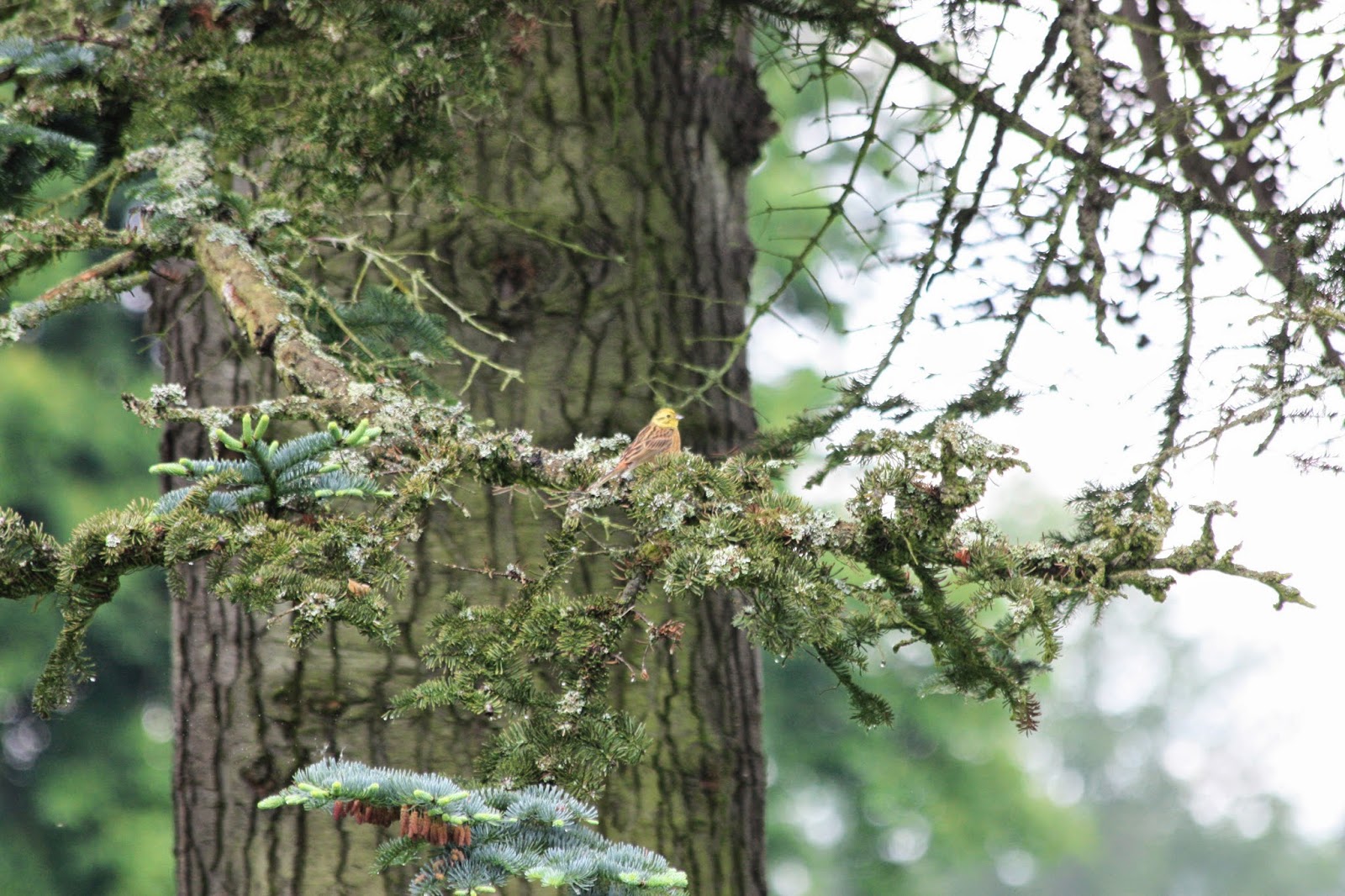 We also had a wonderful view of a brown hare, again it was Crafty Green Boyfriend who caught it on film (again click on the image to enlarge it). 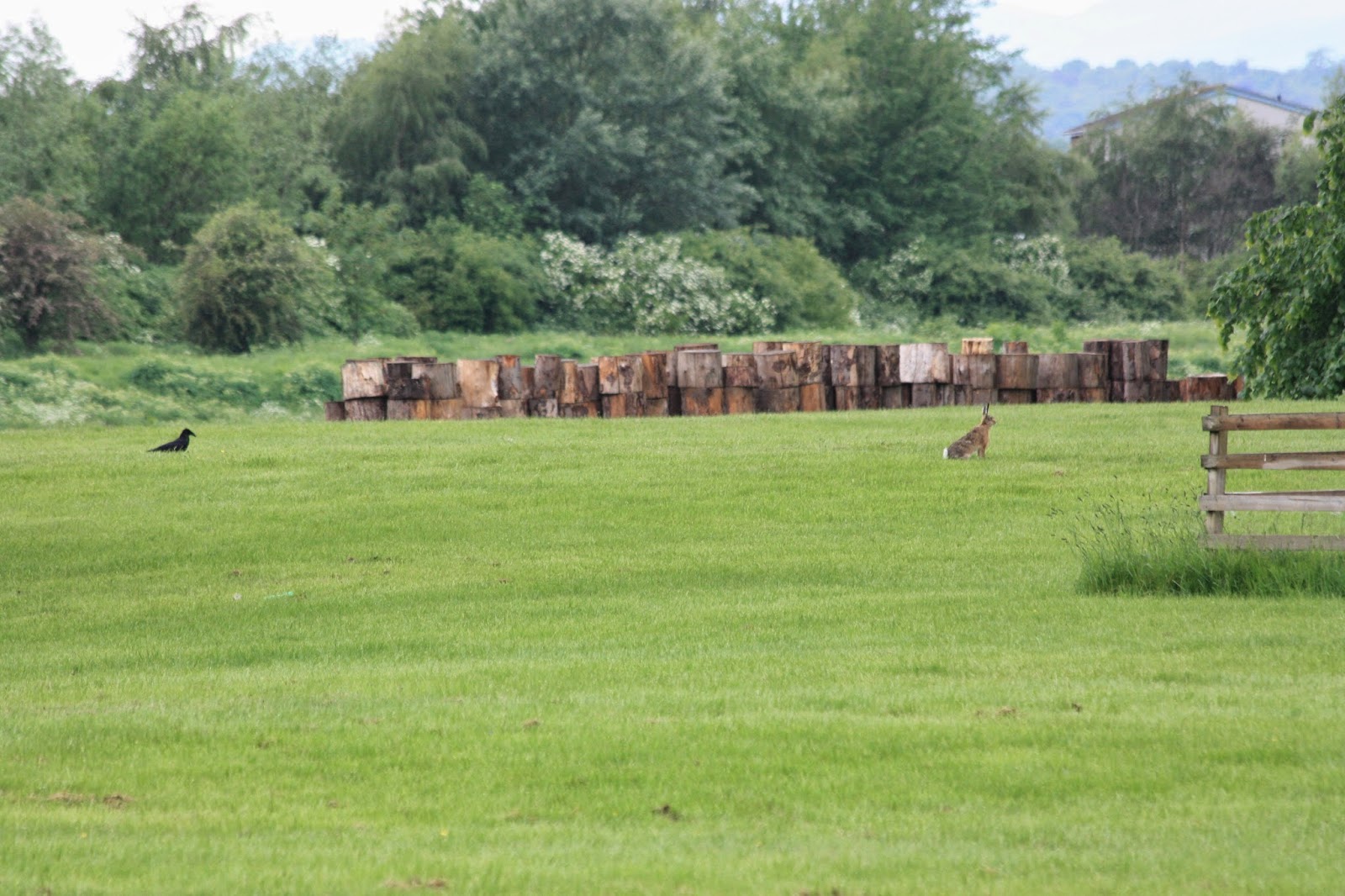 We then walked back to our B&B, as it hadn't been as long a walk as we had originally thought it would be.


***
A reminder that I'm running a blog giveaway to win a pdf of my book Bougainvillea Dancing, poetry, prose and photos inspired by Malawi. Find out more and enter here.

Holy Toledo, that is One Big Rabbit!
The yellowhammer looks like someone was making brown birds and yellow birds and decided to throw caution to the wind and go for a little variety. :)

the hawfinch is snooty, eh? :)

Sorry, the Hawfinch did not show up! The Yellowhammer is pretty and I love the huge hare. It is a beautiful place for birding. Lovely photos. Happy weekend!

I do hope I will see another Yellowhammer before long. And I would love to see a Hawfinch (and a Crossbill, for that matter). What a lovely day you had!

Your walks always sound wonderfully relaxing and full of good sights and had to laugh at that finch.

Looks like you had a great day out and I enjoyed seeing your lovely photos.
I can see what looks like a crow creeping up on the hare.
Happy weekend
hugs
Carolyn

Oh wow Scone Palace looks like quite the amazing place! I love that picture of the hare (with the crow behind it). That hare looks HUGE!

What a beautiful place. You take the best walks! But I wish you had not kept saying scone. Now I'm hungry.

Thanks for all the comments, yes the hare is very large compared to a rabbit!

TexWis - yes we thought that about the hawfinch too, when we read where it prefers to live...

Caroline - I'd also love to see a crossbill!

DraffinBears - yes the crow does seem to be following the hare, but soon after the photo, the hare ran off and the crow flew away

love the photo of that hare,xx Rachel