I blogged recently about the proposed housing development for Cammo Fields and the public meeting that's happening on Thursday. I said in my previous blogposts that the area is rich in birdlife and today Crafty Green Boyfriend and I went along to the fields to record the birds we saw to feed into the meeting (though hopefully the local Wildlife Record Centre and Scottish Ornithologists Club will be adding in their records too). 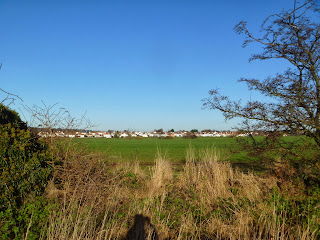 the field that may be lost to houses, photo taken by me 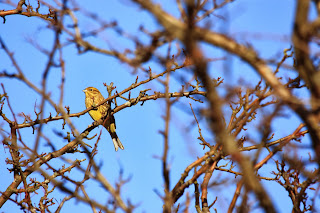 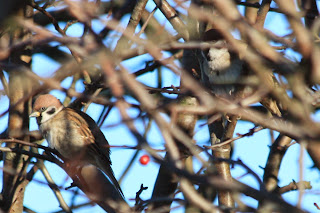 tree sparrowshiding in the shadows in the hedge, photo by Crafty Green Boyfriend

We continued our walk into Cammo Estate itself and the autumn colours and shadows were magnificent in the woodlands. 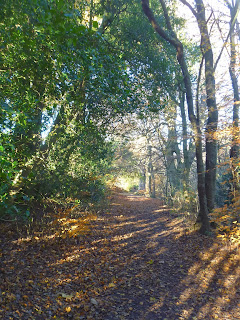 A reminder that the public meeting will be held at Cramond Kirk, Cramond Glebe Road at 7.30pm, Thursday 28th November. If you can't get along to the exhibition or public meeting, but have a genuine interest in the development then you can respond on the Cammo Development website.

as ever, red text contains hyperlinks that take you to other webpages where you can find out more.
Crafted by Crafty Green Poet at 4:45 pm

Email ThisBlogThis!Share to TwitterShare to FacebookShare to Pinterest
Thinking about: birds, cammo fields, campaigning, greenbelt, In and around Edinburgh, nature diary, photos

i am sure you have a battle ahead!! best of luck. the bird shots are great!!!

it is a beautiful area. good luck...

Oh, a beautiful area indeed and wonderful captures for the day. Best of luck!!

Oh, yes! Please count the birds while you can. I hate the thought of that beautiful area being overrun with human habitations!

Wonderful variety of birds seen during your walk. I do hope you can win this battle. I wish you and the birds the best of luck!

lovely shots- very sad to hear about future plans for what should remani a field. We have 10 acres of our own and have massive amounts of birds including Goldfinches. Good luck with your battle.

Lovely shots for us to enjoy! I would so take a walk down that lane!

I do hope you are able to save the field! It seems people won't be satisfied until everything is paved over, built on, or planted in sod.

I'm glad you are taking a strong interest in stopping this project. It breaks my heart to see all the wild places being nibbled away by greedy corporations. I wish you well!

Loved seeing your beautiful bird photos and it looks like a gorgeous area.
Best of luck with the battle ahead and hope the development can go elsewhere.

I really love the yellowhammer picture :)

Yay, Birds! Lovely photos. I certainly hope that area and others like it can be spared development

Oh that last photo - you are sure it is not a photo of an old master's oil painting?

Good luck with the campaign.

I would think some of the lands there would be zoned for housing, and others zoned for rural or agriculture or critical habitat or ... otherwise what is to stop a developer, as long as that development does not befoul the waters or atmosphere and meets building codes.

good to see the birds are cooperating nicely with you :)

thanks everyone for your best wishes for the campaign, I'll keep you up to date on the blog!

Rabbits Guy, this field (and the others nearby) is at the moment greenbelt and thus protected from development of any kind. But the council are wanting to rezone it for housing. Of course, it makes a mockery of the greenbelt if they just re-zone when htey feel like it...