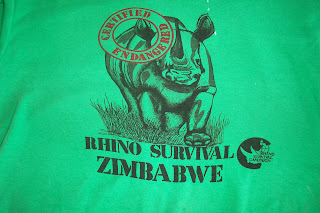 Rhinos are threateened with extinction largely due to hunting pressures. At the root of the crisis is the myth that rhino horn contains curative properties. Rhino horn is in fact, like human nails, made of keratin and has no medicinal properties.

Knowsley Safari Park in Merseyside, north England is highlighting the plight of the rhinos with an innovative art project. Throughout September, the Park is asking visitors to donate their finger and toenail clippings in a bid to debunk the myth that rhino horn has medicinal properties. The collection will run until enough clippings are collected to equate to an adult rhino's horn. They will then be crafted into an artwork, which will be put on display before being sent to South Africa ahead of the CITES (the Convention on International Trade in Endangered Species of Wild Fauna and Flora) meeting in 2016. This campaign really appeals to me because it gets people involved in a practical and thought provoking way and produces a piece of art that will then be used to influence world leaders in their decision making.

As ever, red text contains hyperlinks that take you to other webpages where you can find out more.
Crafted by Crafty Green Poet at 9:22 am

What an interesting campaign! I am for anything that help save or protect the animals.

Lets hope the message gets through,xx

Oh I remember in the 90's when I visited the zoo of Rome and there was a Rhino, I think grey or white, considered as a very endangered species, almost exstinguished. Everybody touched it from behind the bars, my wife said: "I do not want to do that like all the tourists.." then she fell into temptation and started touching that very hard skin and she looked fascinated, she kept pressing her thumbs on it saying" since I have started doing that I want at least him to feel me..."