I'm longing for Spring but also really enjoying the current belated winter wonderland. I've never seen snow like this in March before, though I've seen snow fall as late as April, I've never seen this much at this time of year. 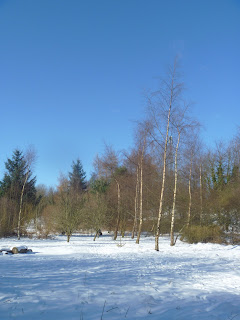 Today I walked through Colinton and Craiglockart Dells by the Water of Leith, as I do most weeks. Along one side of the river, the paths were delightfully deep in snow, while on the other side they were often icy and slippery. The river is fast moving, but in parts it has frozen over a wee bit. 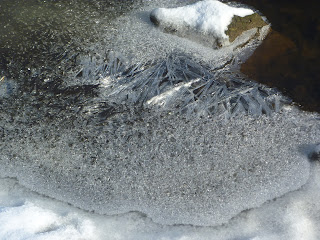 But despite all the ice and snow, the sun was out, the sky was clear and there were signs of spring everywhere. The chaffinches were collecting nesting material, the jackdaws were busy round their communal nesting site and lots of birds were singing.

As ever, red text contains hyperlinks that take you to other webpages where you can find out more.
Crafted by Crafty Green Poet at 12:43 pm

Email ThisBlogThis!Share to TwitterShare to FacebookShare to Pinterest
Thinking about: In and around Edinburgh, nature diary, Spring, Water of Leith, winter

I'm hoping for one more snow here before spring :)

Yes Juliet, we have had a lot of snow here and yet the birds are carrying on as though it is spring.

Spring is in the air no matter what is on the ground!

There certainly wasn't much sign of spring here yesterday ... more like east coast blizzards, but we have had beautiful spring moments today. I was so thrilled to see a daisy in the lawn last weekend!

Anyway spring coming...and I have a sort of haiku.. half political, half seasonal.. for you:

Nothing better
than talking about the '68
waiting at the spring gate.

How beautiful. We did not get much snowfall here in Alabama this year. I miss it.

Yup - just not quite time to put away the gloves and mufflers.

If you appreciate snow, come live in New Brunswick, Canada. The snow is beginning to melt a little here but it is still deep. Your photos are lovely.

The poor birds don't realize it's still winter! Oh well, even all that deep snow can't last too long this time of year can it? (I hope.)