Birdwatching in the sleet

Yesterday I took my birdwatching class to Musselburgh. It was cold and sleeting but one of the big advantages of birding in Musselburgh is that the river is always full of birds so you don't need to worry that you'll end the walk disappointed.

Despite the weather the birds were all behaving as though it were spring!

The male goldeneye ducks were displaying to each other, throwing their heads back against their backs. The Canada Geese were getting very argumentative at times and the wigeon were quite lively. (Wigeon are such pretty ducks, and it was lovely to see quite a lot of them as they'll be migrating north fairly soon). A pair of mallards were shaking their heads at each other until he jumped on top of her and almost drowned her. At least there was only the one male, I've seen mallard drakes gang up in large numbers on the poor female. It looks brutal but it's their way of breeding and if they didn't do that then there would be no more mallards.

I don't take photos when I'm leading a group, but if you follow the links you'll see the birds.

I also found this piece of sea pottery just sitting on the pavement! It's very pretty, though I'm not sure the edges are smooth enough for me to put it in my Crafty Green Poet Etsy shop. 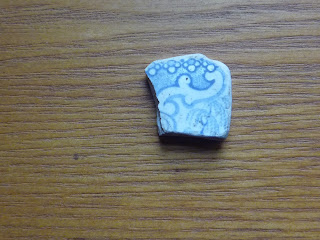 Crafted by Crafty Green Poet at 11:19 am

It's funny (I guess) how we etegami artists start painting flowers and strawberries and suchlike in March, even though we're still buried under snow in northern Hokkaido. In Japan, people always follow the calendar, regardless of the actual weather. March is spring, that is that. In March, haiku is expected to have spring themes, and so is etegami. I guess the birds feel the same way?

I really want to take a bird watching class someday and go on an organized bird watchnig mission :)

I have noticed too that the birds and squirrels are all acting like it's spring even though we just had another snowstorm and the temperatures are below freezing!

The pond was the Serpentine in Hyde Park, London. I spotted a pair of ducks who seemed to be peacefully paddling. I snapped a picture with my digital camera, and when I looked back at the pond what I saw was the picture depicted in the haiku. But I didn't know the whole story until I looked at the screen on the camera and found I had captured the two in flagrante delicto!

All I could say was "All right. Now quit bragging."

The haiku was originally published in Ambrosia.

The photo prompts such an urge to find its missing pieces. http://www.looseleafnotes.com

Maybe there's a subtlety in birds that makes them sense spring beyond any weather. Here in Venice is still cold and yesterday it rained fearfully but birdsong is rapidly increasing from dawn to sunrise.

A lot of mallards live around my house brought by some hunters who were used to hunting geese among the sandbars of the lagoon... thank God it seems now they have stopped.

We still have Mallards and American Black Ducks coming to our yard for food. Though spring has given us a nod, I hear we are in for another snow storm tonight. So real spring will be awhile coming yet.

Sounds like a great outing and walk. The ducks are great this time of year. Sorry about the weather, though! Have a happy week!

The sea pottery reminds me of a recent incidence. About a year ago, on a field work event planting trees, I dug up a piece of pottery about that size. It had some colored trim on it. I put it in my jacket pocket. The other day I was on a different kind of event on the beach and someone found a nice little piece of beach pottery and we all uhhed and ahhed over it. I remembered the piece I had in my jacket pocket and took it out. "Oh, that is McCoy pottery" said this lady. I went home and looked it up and sure enough - it was - she knew just from the bit of colored trim!!!

Ha, The title of your post made me smile! I have never heard of a wigeon, another bird fact to add to my beginner's knowledge. Poor mallard, that would have distressed me to see an almost drowning. And I absolutely love your fragment of sea pottery.

Sounds like a fun walk in spite of the drearies! The piece of pottery is lovely! I like the old fashioned name for widgeons, which is "Bald Pate." Have you heard of it before?

Ah, Spring! Ah, sleet! We had a couple of days at 70 degrees during the past week. Now sleet and snow are in the forecast. Never dull around here.