Snowdrops and sunshine by the Water of Leith

I take the view (that I think is fairly common in the UK) that Spring officially starts on 1 March (I know that readers elsewhere will disagree, and I also think that actually Spring starts when she wants to, ignoring our arbitrary dates).

Whatever you think though is the first day of Spring, today definitely was Spring in Colinton Dell, by the Water of Leith. The snowdrops were beautiful, 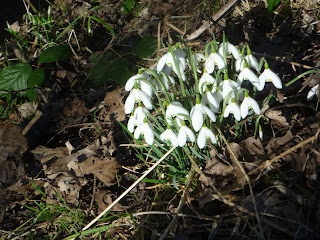 the sun was shining and there were birds everywhere:

we've still got some chill here in the states but i do look forward to Spring's vibrant colors (they should be just around the corner, :)

the snowdrops are beautiful. hope all is well.

I agree - spring starts when she wants to :)

How lovely to see FOUR Bullfinches! I have seen one this year ... so far. Do you know, Juliet, whether we can get 'wild' (as opposed to 'garden escape', though I'm sure there is a better term that eludes me) snowdrops in the UK? I have often wondered. I came across an unexpected clump last w/e in a dell in Rendlesham Forest, which was a lovely surpise as the snowflakes drifted past!

Hi Caroline - I'm just reading Weeds by Richard Mabey, in which he describes the snowdrop as an archaeophyte - a plant introduced to the UK before 1500, so although it's not actually native, it has been naturalised for a long time

It's a glorious day, spring or no spring. Thanks for sharing the photo and for listing the birds - fantastic!
ps snowdrops are my favourite flower :)

I take the view that spring begins on 14 February, St. Valentine's Day. Yes, the weather can be wintry after that, but we all know spring is a tease

There is a sharp North Easterly blowing here today Juliet and it is definitely not Spring-like.

Beautiful chronicle of spring's horizon approaching... yes it's enough the feeling of entering March to make us sense we are in the season of births.

In Minnesota, one of the first signs of Spring is always when the American robins return from down south and the pussy willows come out.

Thank you for the history of snowdrops. I have often wondered if they were native or not.

Too grey and cold enough to chill your bones here today.

Here - when the daffodil blooms. We have snowdrops blooming - but no sun!

I think than in meteorological terms, March 1 is the first day of spring, but what does it really matter?

Friend of the Animals said...

We haven't had any snow all winter in WA State (except for the mountains). Birds have been singing, so spring is on the way. Snowdrops are beautiful.