The Water of Leith Walkway

I recently posted some photos of autumn leaves along the Water of Leith. Rabbits' Guy left a comment asking: is there a regular foot path with easy visibility of the river? Or what is it like?

The answer is that yes, there is a regular footpath all along the river, which mostly has good views of the river. The area of the river that I help to look after has a lot of paths in fact, some of which are right next to the river, some of which are further away. Some areas of the river upstream from 'my' area have the path quite a distance from the river and it can be difficult to get to or even see the water from the path. Downstream, the path tends to be mostly very close to the river, though some parts of the path are closed at the moment because of the flood prevention works, which are running behind time and costing a lot of money. (For all that I would, in an ideal world, prefer to see natural flood prevention measures, in very built up areas this is impossible and you need to use less natural methods. Having said that the work needs to be done as speedily as possible to avoid long term damage to the river. You can read more of my thoughts on the flood prevention works here). 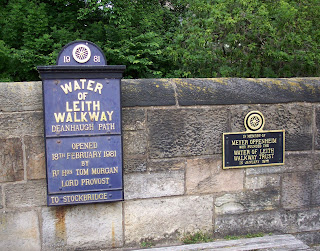 The walkway was first though of in the 1940s, the first section was built 1973 and it was completed 2002. The Water of Leith Walkway Trust campaigned for and developed the first walkways.

The charity that I volunteer for, Water of Leith Conservation Trust (WOLCT) was set up in 1988 by residents concerned about the river. It was the first river charity in Scotland (now there is also Friends ofthe River Kelvin (FORK)).

Colinton and Craiglockart Dells, which is the area I help to look after, will not have flood prevention works, as the area is not residential. In fact it's a lovely wooded area, which is perfect for a birdwatching walk! 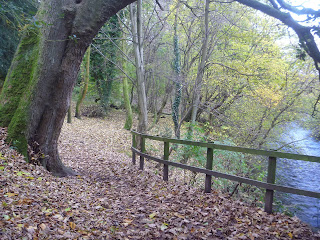 Lucky you to look after an area perfect for bird watching! It sounds delightful.

I love it that you volunteer in helping to keep these delightful woods litter free and as beautiful as they should be. Applause where it is due.

That looks like a lovely place to take a nature walk.

How pretty! Thanks for the story and pix ...

Great photo, great places. I will have to spend a whole day on your posts before leaving after Christmas. I will have to try to print something. About the woods, the countryside, the cemetery, the hills...walking boots are ready at hand, a pity I can't bring my dog but I've found woods for her here in the hills not far from Venice..

What a pretty place, the walkway has a lovely view of the water. It does look like a great area for birding. Great post, have a wonderful day!