Peter Rabbit is one of my oldest cuddly toys. There's a lovely photo somewhere of me holding Peter Rabbit when he was new. I was fairly new at the time too. We're both ageing now though. Peter was keen to meet Sylvain, the French rabbit who is visiting from Cottontails Baby.

Peter has spent a lot of his life in a state of confusion. As soon as Sylvain met Peter, he realised the source of Peter's confusion. 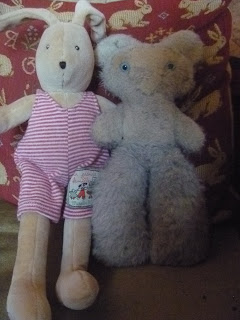 Peter isn't actually a rabbit. He's a teddy bear. Why I called him Peter Rabbit I don't know. In fact I'm not sure I was even old enough to be the one to name him. Which begs the question - why would my parents call him Peter Rabbit?

Despite their many differences Peter and Sylvain seemed to get on very well. I think they talked a lot about what it means to be a rabbit. Sylvain will be moving on soon, but he's made a lot of friends here! Thanks Charlotte for letting me host Sylvain!

As ever, red text contains hyperlinks that take you to other pages where you can find out more!

How I would love to discuss life with Sylvain and Peter Rabbit.

They look like great friends, Peter and Sylvain! Just adorable!

Love it. I had an old stuffed bunny from very early childhood. Pete went everywhere with me. I even took him to college. He finally got so old and worn that I had to patch him a lot. All his foam rubber stuffing is hard and crunchy now and he's really a wreck. He's stored away because he's so fragile. I miss not being able to have him out, but it's for the best.

This is so cute! Great story about a well oved friend. Is there a kids book in this?

Well, there is another way of looking at this ;)

Dosankodebbie - they're having some very interesting chats!

Eileen - they are indeed!

Bunnits - that sounds like a well loved bunny indeed!

Karen - there may be!

Glo - thanks for the link, made me smile!

Perhaps he was raised by rabbits, thrived on a diet of grass and dandelions (as evidenced by how good he's looking for his age), and no one felt inclined to disabuse him...

I have a teddy from when I was about 4 who looks a bit like your teddy! Yeah, maybe they thought the legs were ears - hahaha

How wonderful! It sounds as if Sylvain and Peter were getting quite philosophical - what it means to be a rabbit... hmmm.... Another brilliant post Juliet. I am SO pleased Sylvain came to stay with you - he is having the best time :)
xx