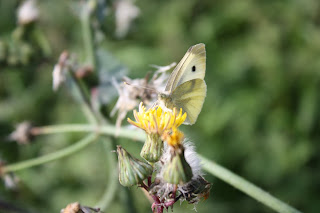 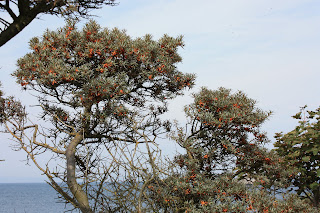 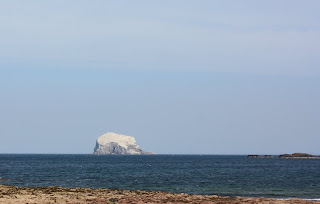 Blogging about organic issues every day during Organic Fortnight would be too much for all of us, so some days I'll be blogging about other things! Today we had a lovely day in North Berwick, a small town a short train journey away from Edinburgh. North Berwick is famous for the Scottish Seabird Centre which focusses on the gannets and other wildlife of the nearby Bass Rock. We didn't go to the Seabird Centre today but walked along the beach away from the town. The weather was perfect, sunny, blue skies and very warm. House martins were swarming above the town and low over the sea, swallows were swooping low over the golf courses and gannets were diving from the high hazy sky into the sea. Eider ducks bobbed in a group of twenty, while a family of cormorants gathered on a rock and there were several oystercatchers too. White butterflies fluttered everywhere and there were darker butterflies too though most of them flew by too quickly, at least one of them was a peacock. There were ladybirds all over most of the grasses by the coastline and lots of grasshoppers too. Later waiting for the train back into Edinburgh we saw a swift flying among the house martins, the swifts should have left by now, though I have seen some stragglers around in September in previous years.
Crafted by Crafty Green Poet at 9:13 pm

these photos are wonderful. your day sounds perfect. we had blue skies with BIG, fluffy white clouds and sunshine but it was cold. the wind blew all day. i woke to see the squirrel playing in the trees across the road and later that evening i saw a goldfinch at my feeder. missed a great shot of a hawk today, both times... sigh. overall, not a bad day. hope all is well.

We are finally getting a bit of a break from the extreme summer heat we've had here in Alabama and the rest of the Southeast this summer. The mornings have been delightfully cool, even though the afternoons still heat up a good bit. I think I will really enjoy autumn this year.

Bass Rock photo reminds me much of the coast of Southern Oregon - Bandon - where the Irish settled. Several big rocks out to sea - the remnants of weathered headlands - including famous Face Rock at Bandon.

Only been there the once, thank you for the glorious photographs and reminder.

Our little town in Washington State, U.S.A. has a major Swift population (living in the old, now unused chimneys of an elementary school). Our swift night out isn't until the 21st of this month. Then, for several weeks, the swifts will be coursing around the sky before they leave for warmer climates.

The rock out to see is spectacular!

What tranquil surroundings! BTW, I had no idea you could speak Italian. Benvenuta!

Crafty Green Boyfriend did a great job on the pictures! How beautiful!

Thank you for your good thoughts on Freckles' surgery. She's doing much better today and seems quite happy to be home again.

The swallows and martins are gathering in Lancashire too. How white the gannets have made Bass Rock!

Thrilled to see the photos: I had just finished a Land&Lit post on Tantallon and Bass Rock!

P.S. Had quite forgotten that we also saw lots of Ladybirds in the Bass Rock area a year ago - esp. on the path to the castle. Also at St Abb's head.

CURIOUSLY the word verification is dibishbe ... which reminded me of the local name for ladybirds in Norfolk where I grew up!