Volunteering Recommences along Water of Leith

As lockdown eases in Scotland, volunteers are starting to return to the Water of Leith!

Yesterday I did my first river patrol in the Dells since early March! (We don't live close enough to the river for it to be within the allowable distance for #DailyExercise during lockdown.) It was lovely to be back along the river, to chat (at a safe distance) with people I haven't seen for months and to see so much wildlife. I had been concerned that I would find loads of litter along the paths, but there was relatively little, so I didn't have an onerous task picking it! One of the dog owners I chatted to, has been able to pick litter along the river throughout lockdown, and no doubt others have been doing the same. This is brilliant and shows how people have been caring for their local greenspaces. 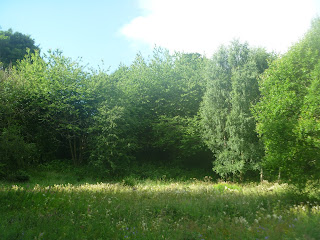 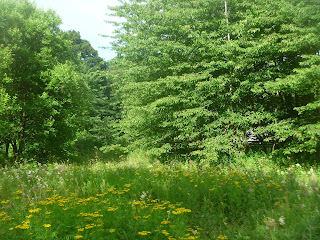 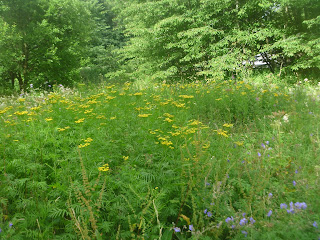 Several house martins were flying above this meadow, which is lovely to see and it was also just here that a roe deer trotted out of the undergrowth onto the path and then disappeared back into the undergrowth when it saw me! The sparrowhawks are fledging further downstream, though you can hear the noisy youngsters from quite a distance away. The other wildlife highlight of the walk was standing under an apple tree and being surrounded by blue tits and long tailed tits with a goldcrest joining them!

I'm looking forward to getting back into the habit of walking this part of the river every week!
**
In other news, I found out via Twitter, that my poem Lost Dances of Cranes has been set to music by mezzo-soprano, Mariya Kaganskaya, composer Elinor Armer and pianist Alla Gladysheva. You can watch the video on Youtube here. While I'm flattered to have my poem set to music and it's a lovely video, it would have felt better to have been asked in advance. What do readers think on that one?
Crafted by Crafty Green Poet at 7:37 am

Juliet, it would definitely have been better for the musicians to have asked you first. Perhaps, they did not know how to get in touch with you.

1. We here been able to start safe volunteer work too - lots of friends took to their own neighbor hood and streets to do clean ups during lock down too!

2. Gosh the poem was on the blog so long ago - back when blogging was "THE" thing!!!

3. Well they did get permission from the magazine but yes, at least a prior "heads - up" seems right. Is that singer well known? It was nicely done ... seemed to capture your words well.

Hi Gershon, I'm easy enough to find with a simple online search! Plus she knew how to tag me on Twitter!

Rabbits Guy, yes a long time ago, blogging was definitely bigger back then. I like the video too, I don't think the singer is well known, though the composer is relatively well known. The line about permission from the publisher was only added after i had emailed both the singer and the composer. Turns out my publisher had given permission without letting me know!

Hi Juliet. I agree, it would have been polite to ask first, or at least let you know - your publisher ought to have told you, definitely! Joanie

Hi Joanie, well now it gets even more complicated, as my publisher is denying ever having heard from (or even of!) the composer. He assures me he would never give permission for my poetry to be used without asking me. So the composer now seems to have been lying about having got permission!

Wow, you should have been asked *and* compensated. Good grief, it is your creative property. ... (but I still want to go listen to the YouTube. Is that hypocritical?) ..... Anyway, back to the happy part of your post ... I’m so glad you’re able to resume “almost normal” (and I want to move there. It will be a long time before anything approaching normality happens here due to circumstances I’m sure you are aware of.)..... it’s wonderful that you volunteer and even more wonderful that people, for the most part, took care of the land even during the crisis and lockdown.

Hi Sally, yes, compensation would also be nice, specially as i found out that sheet music for the somg cycle including my poem is being sold for $25. I hope that things fo start to get back to something like normal for you over there.