The Honey Bus by Meredith May 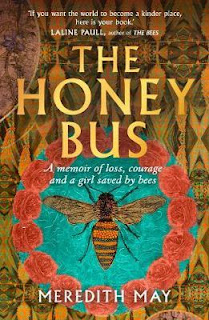 "We stepped into a mini-cyclone of bees, a roaring inkblot in the sky, banking left and right like a flock of birds. My heart raced with them, frightened and awestruck at the same time."

At the age of five, Meredith May found herself abandoned by her parents, her father walked out on the family and her mother took permanently to bed. Meredith and her brother found themselves living with their grandparents.

Grandfather was a beekeeper, keeping hives and making honey in an old broken down bus. Meredith immediately became fascinated by the bees.

"As the bee got used to me, I got used to it. Grandpa was right. this small insect was not my enemy. I carefully lifted my arm and i could see into its eyes, shaped like two glossy black commas on the side of its head. Fear gave way to fascination as I studied how it was put together, so small, so perfect."

This fascination stayed with her the rest of her life, giving her an engrossing hobby, which helped her to cope with the very difficult life she was living, and lead to her keeping bees of her own today.


I really enjoyed the insights into how bees live, particularly this description of scout bees (that search for new locations for hives):

"the bees gather a list of addresses from various dancing scouts and go inspect their options. They fly into the advertised locations, taking measurements, checking the security of the entrance and feeling for drafts. They make their decision and return to the hive to dance with the scout whose home they prefer. As the energy and excitement builds, one scout reaches a tipping point of support, a consensus is reached and the entire swarm takes off with the queen to that scout's specific location."

This memoir isn't just about the bees themselves, it also explores the life lessons Meredith learned from the bees. As such it often feels as though she is imposing adult thinking onto her much younger self, but nevertheless it is an inspiring and moving book.

The Honey Bus by Meredith May published (2019) by Harper Collins.
Crafted by Crafty Green Poet at 7:53 am

Sounds like a must-read for me. Thanks for the review.