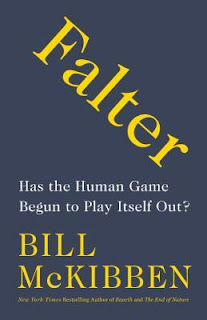 Subtitled Has the Human Game Begun to Play Itself Out? this is a hard hitting, sobering analysis of our current ecological crisis, the state of technological progress and whether solar technologies and large scale non-violent direct action can help us. Written by the respected environmental campaigner Bill McKibben.

The first part of the book looks at the state of the environment. It reads like a catalogue of doom.

The increasing severity of forest fires across the world combined with droughts and selective logging is changing the world's forests into carbon emitters rather than the carbon sinks they naturally are. Even if we stop emitting greenhouse gases today, the world's glaciers will still be set to disappear by a third in the next few decades. As ice sheets melt, they cause the earth to move, literally causing earthquakes. A severe heat wave in Russia in 2010 caused the world wheat price to rise dramatically and is considered to be one of the triggers of the Arab Spring. Warmer temperatures mean more plant pests, additionally affecting food supplies. We may see 200 million climate change refugees by 2050. The list continues. It's all meticulously researched, horribly fascinating and depressing.

The book then looks at political philosophies and corporate vested interests and the effects these have on the climate crisis. There is also a long section on genetic engineering and how this potentially changes the meaning of  life.

Just as everything starts to feel as though there's no point in continuing, the last section turns to the beacons of hope that McKibben sees in solar technologies and non-violent direct action. He goes into some interesting detail about the increasing efficiencies of renewable technologies and the optimism of non-violent direct action. But there is no mention of the necessary deeper changes we need to see in the way that politics and industry work, the larger, deeper reform that we need if we are to succeed.

I felt this was a book that was too grim and offered too few genuine far reaching solutions (not that solar power and direct action aren't important but they need to be part of something bigger, more systemic). I don't think that the style of this book will win new converts either. People who aren't already engaged need stories that start from where they are and offer them realistic pictures of where they can go and how they will benefit themselves.

Email ThisBlogThis!Share to TwitterShare to FacebookShare to Pinterest
Thinking about: books, campaigning, review

Thank you for this thoughtful critique.

Where I live, on the shores of the Salish Sea, the talk is much more about accommodation and resilience to what is almost surely going to happen and to a lesser volume, what can we (the world we) do to stop the carbon dioxide and methane releases and the rising, warming and slow acidification of the ocean at our door step.